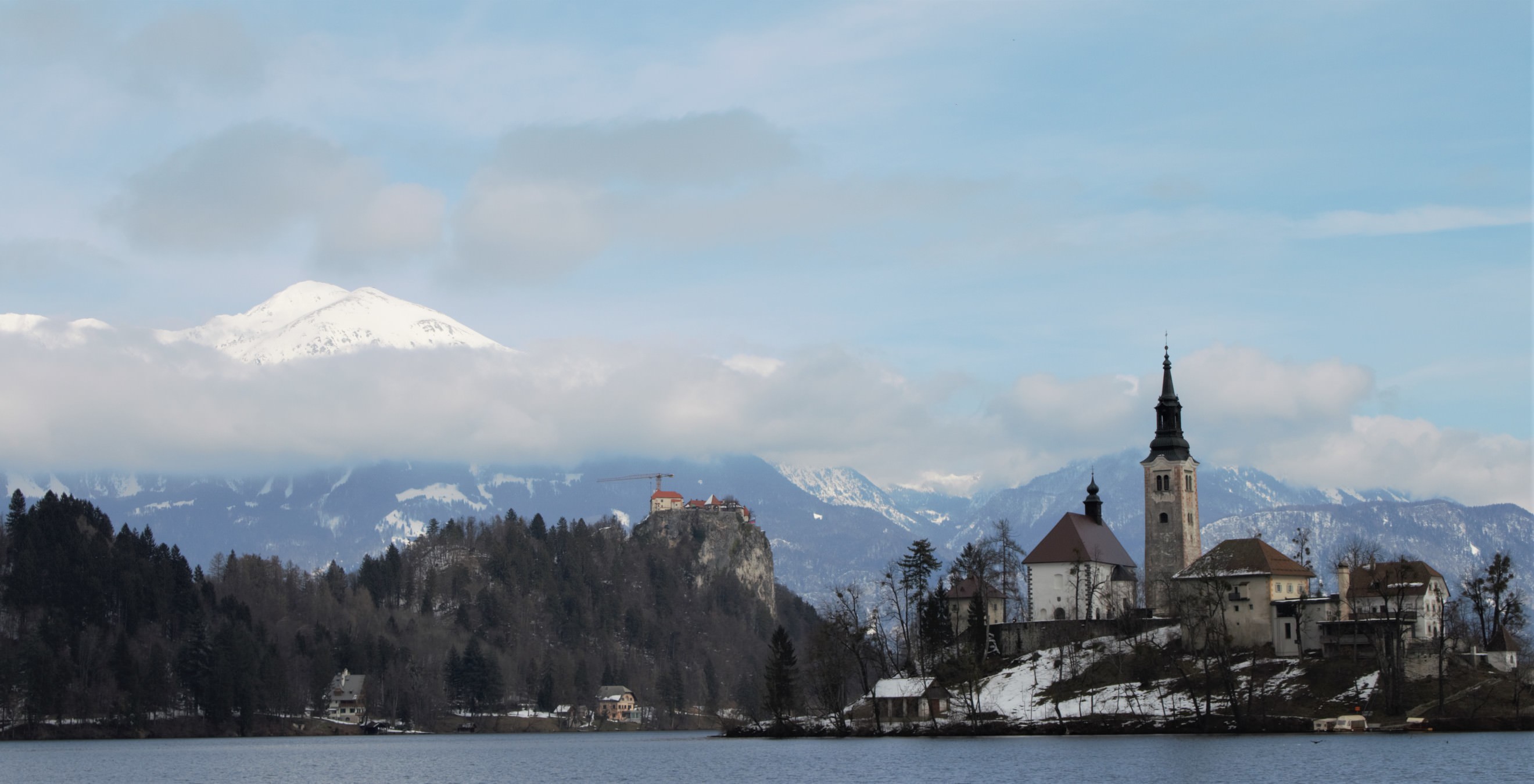 After a refreshing stay in Ljubljana, We packed our bags and headed towards the most iconic and popular tourist destination in Slovenia - Lake Bled. I still remember when I first saw lake bled in some Calendar at my home. Since then the longing to visit that image of a small island between a serene lake surrounded by tall mountains was there somewhere in my heart.

Later in the previous night, we booked the bus to Bled from Ljubljana. Little did we knew, the bus conductor rejected our online tickets and asked us to get the printed one. I was like… Dude ! from where will I bring printed tickets in 5 minutes

. In the meantime the driver got busy in checking in rest of the passengers and we were busy searching for the print shop. Thankfully we found one, got our tickets printed and ran back to the bus stand. Just as we reached the bus station the driver started the bus and didn’t let us in.

We were stranded at the bus stop. But then he stopped the bus because he had forgotten to close the side bunker where luggage is kept. We ran and entered the bus and grabbed our seats, It was an amazing feeling, like stars conspiring to make our journey a success. Within an hour the bus dropped us in Bled. 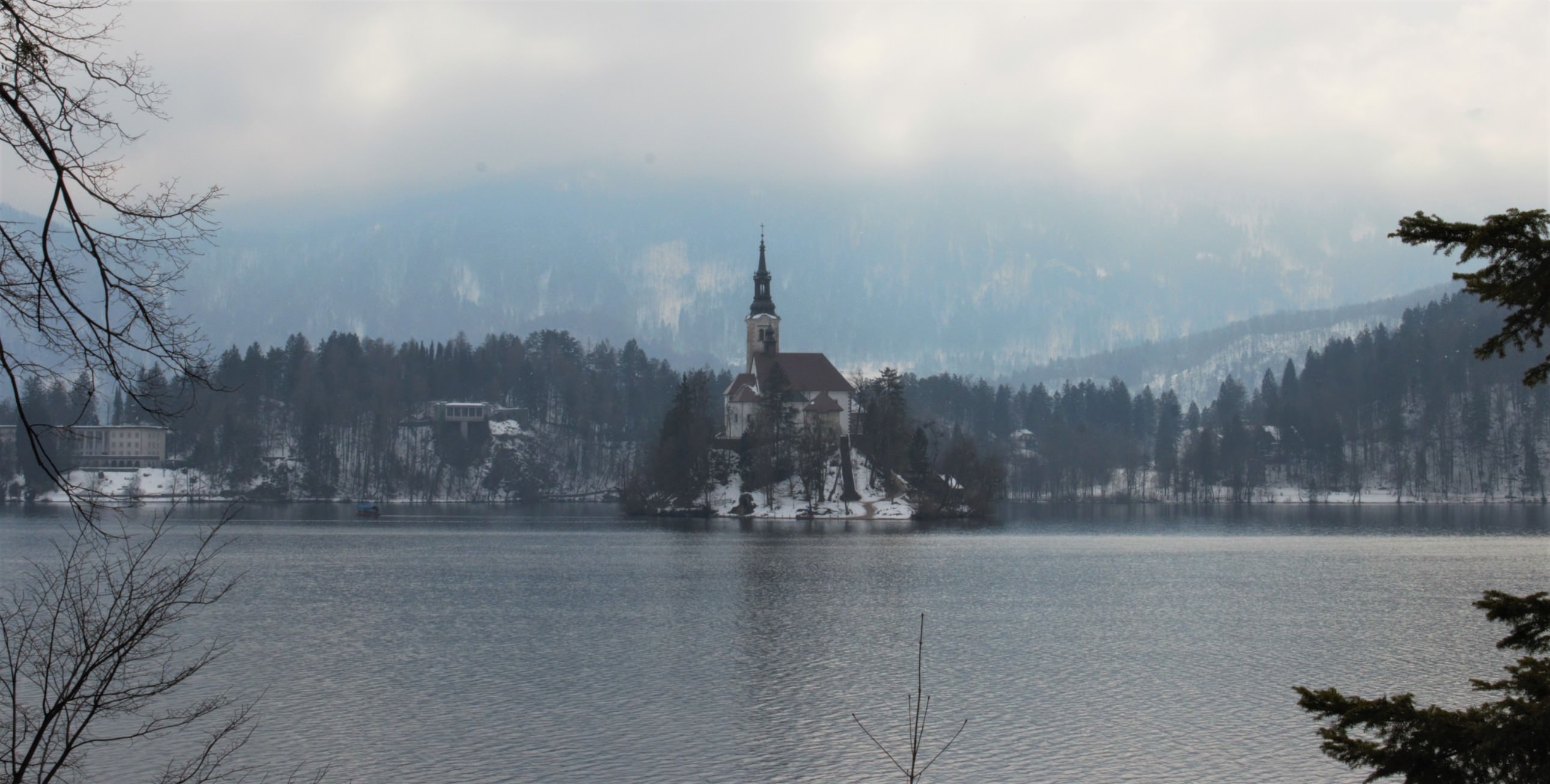 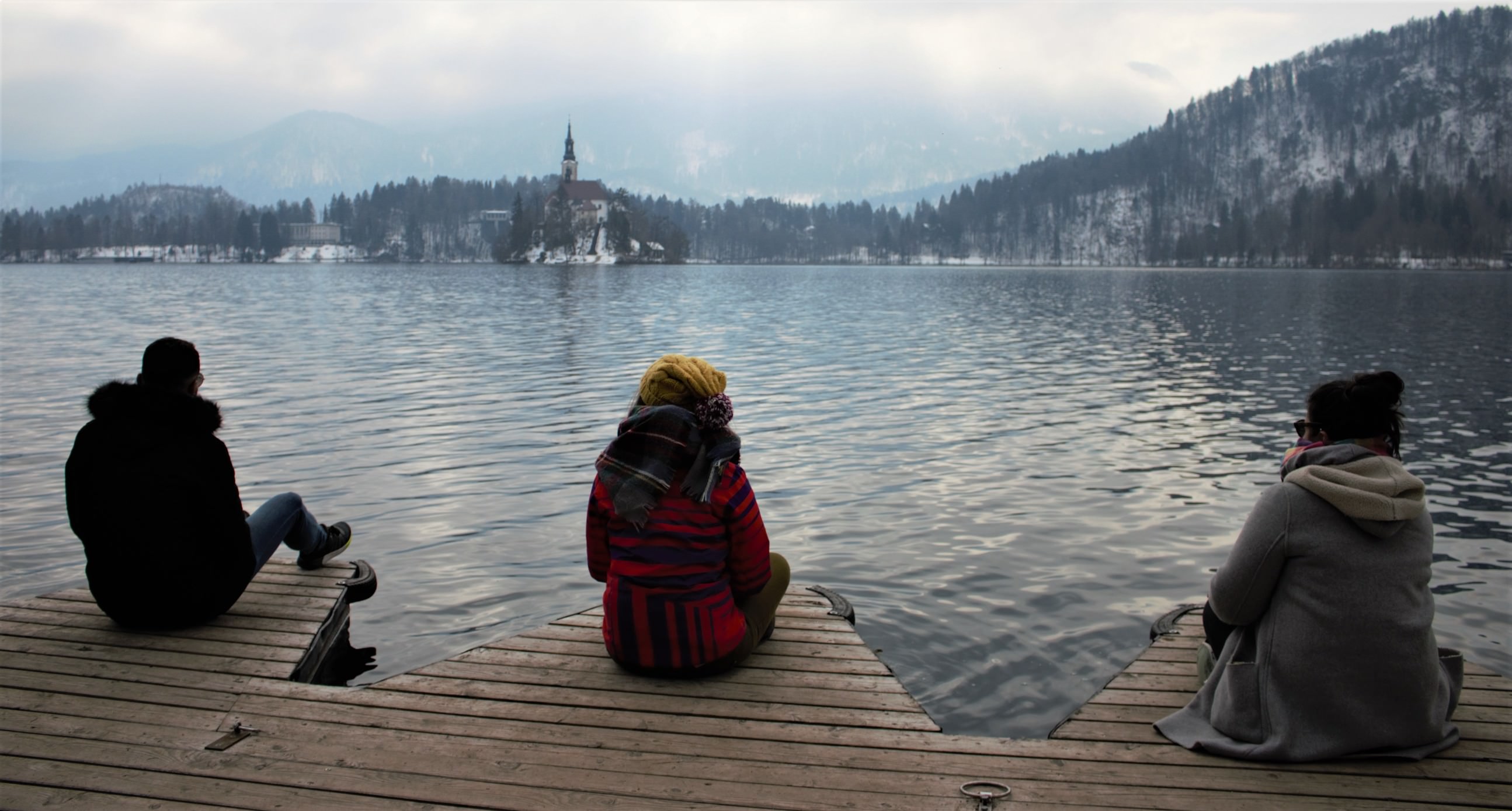 Cute child near the Lake 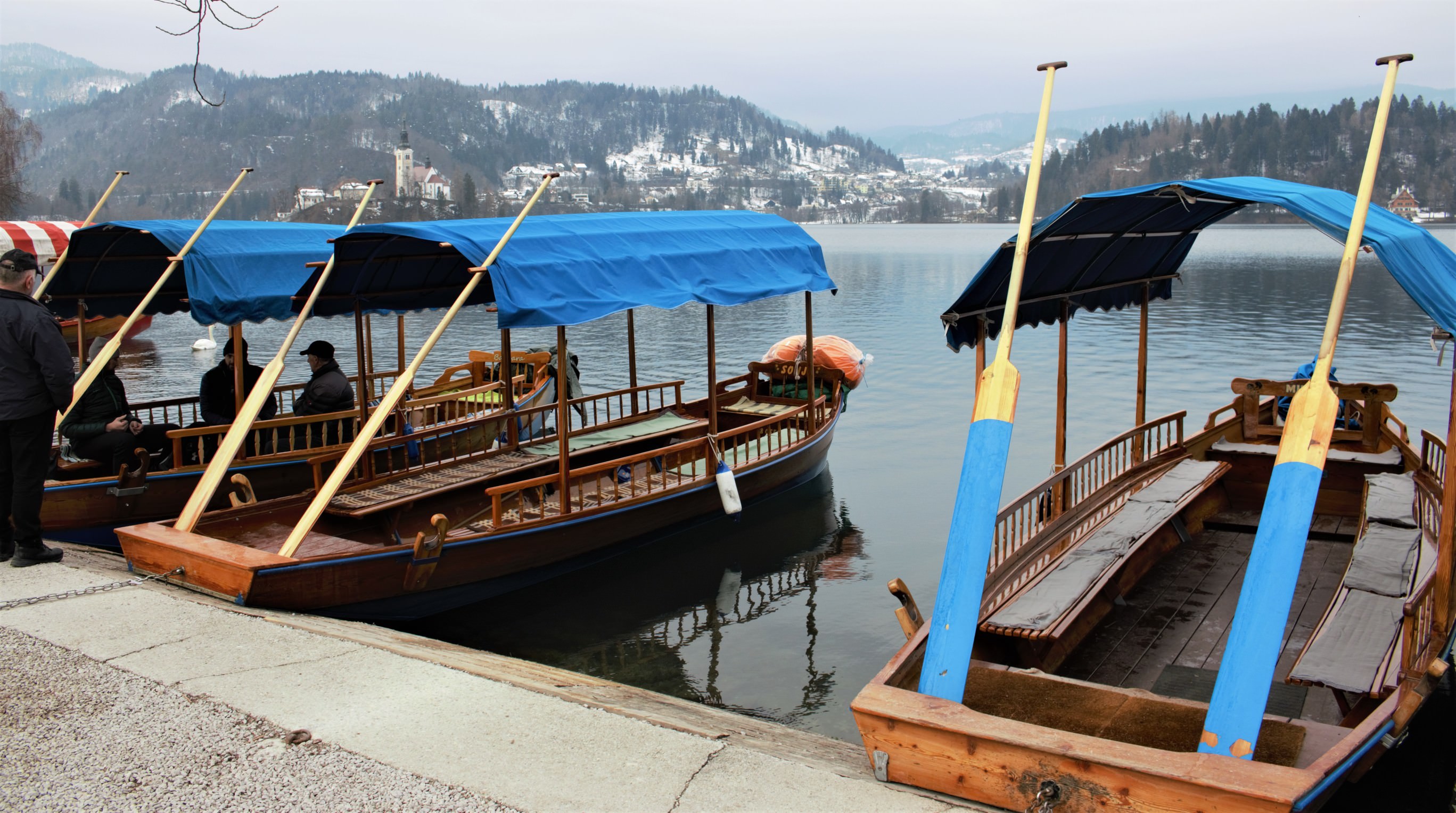 Boats near the Lake 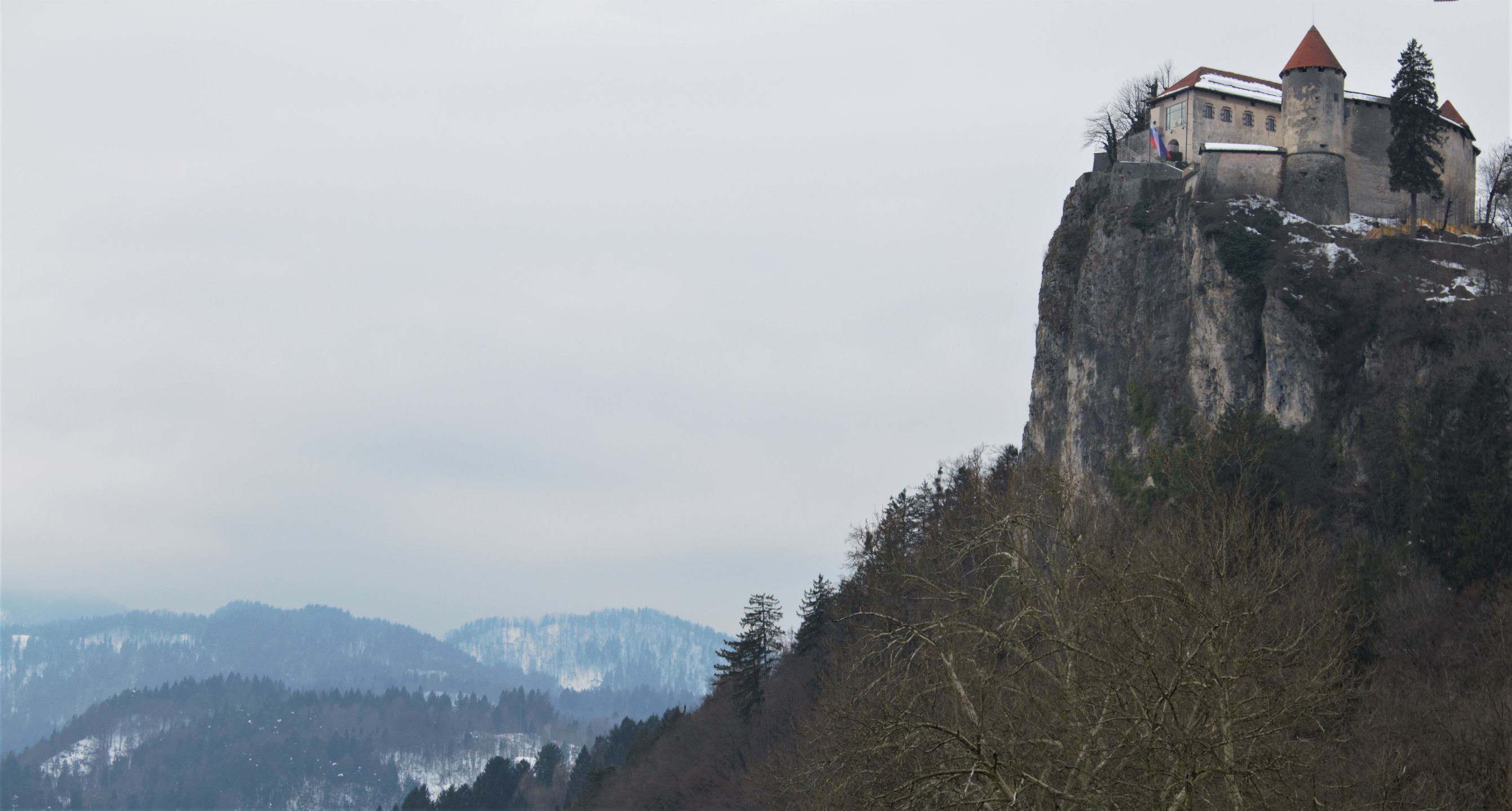 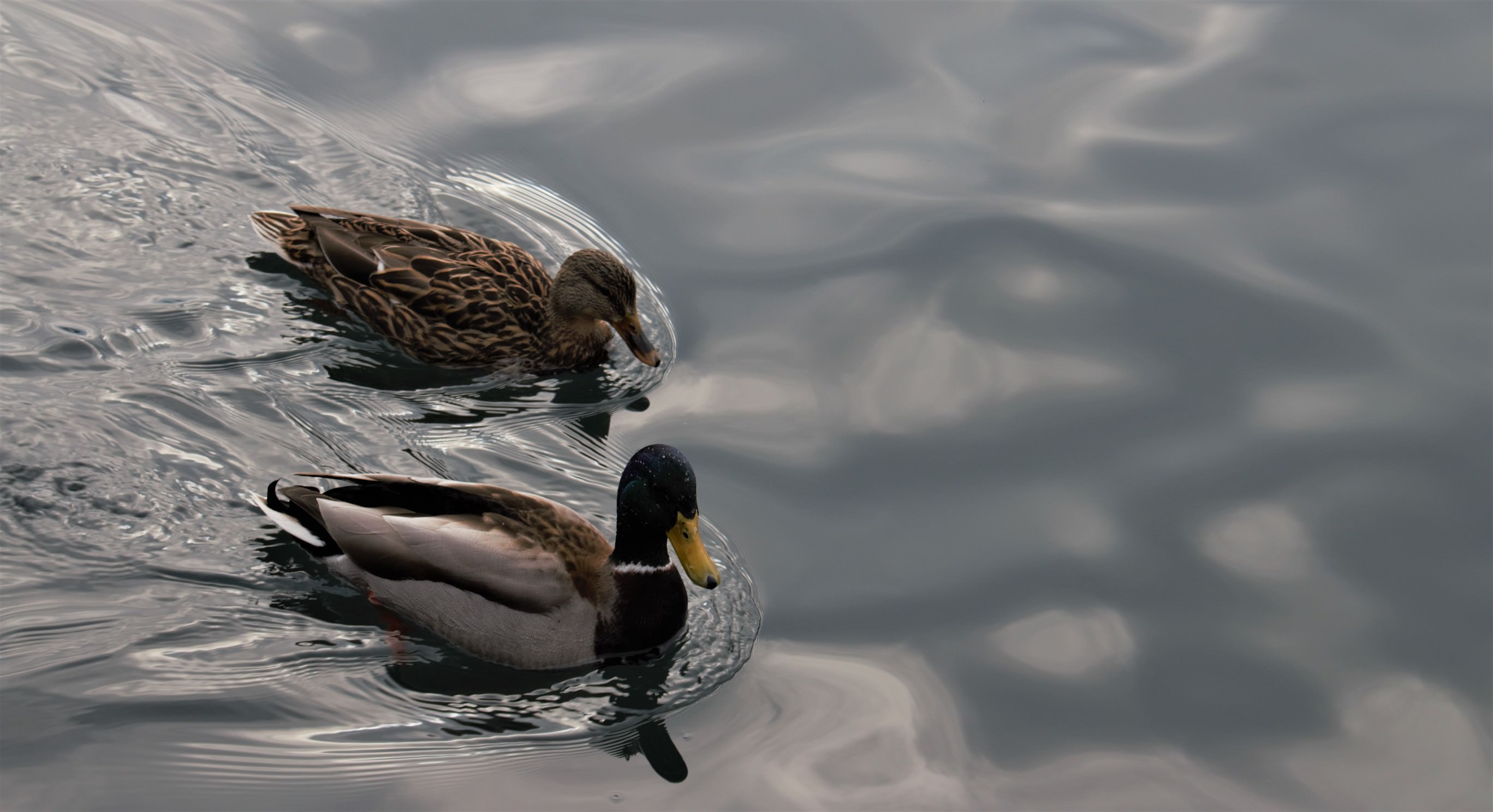 Ducks in the Cold water

The circumference of the lake is around 7 km. Halfway through the lake is a steep hike towards Ojstrica. The people who were coming down told us not to go up as it was already 1 pm and snow was melting, making the path pretty slippery. Due to this the path towards the Osojnica (another vantage point) was closed. But we started to ascend.

It was indeed very slippery, I was wearing plain sneakers, which had a flat sole. This made the hike frictionless. I was skidding, slipping in every step I took. Somehow, I grabbed the branches and twigs to make it to the top. Remembering that hike today still gives me chills.

We somehow reached the top and the aerial view of the entire Lake Bled landscape was well worth the sweat.

We stayed there for an hour, took photos, enjoyed the cold, crisp fresh air and the inspiring scenery. The small island with the white church and historic tower added romance to the idyllic emerald green lake.

One local Guide at the top told that “If you get married on that small island, the groom has to carry the bride up the 99 steps of the church” the guide continued. “I guess it’s the price you pay to get married in a beautiful place like this.”

For reaching the island one has to pay 15 Euros for a 10-minute boat ride. Which I felt was a Tourist Trap. So we decided to skip the island and continue with our walk around the lake.

We started the descent and it was way scarier than the ascend. Coming down felt like walking down on an oil-covered road that is tilted at 75 degrees. It was unimaginable slippery. Then I decided to take the path where there was fresh snow so that I can get some fiction. I moved away from the group inside the forest. It was probably a bad decision . The snow was really fresh and I was not able to figure out the depth. After a few steps, I fell, I fell from a freaking mountain. When I reached down, my thigh was heavily bruised. I thanked the stars that there was no major injury.

Although I was limping, I was the first person to descend.

View of the tunnel from the top 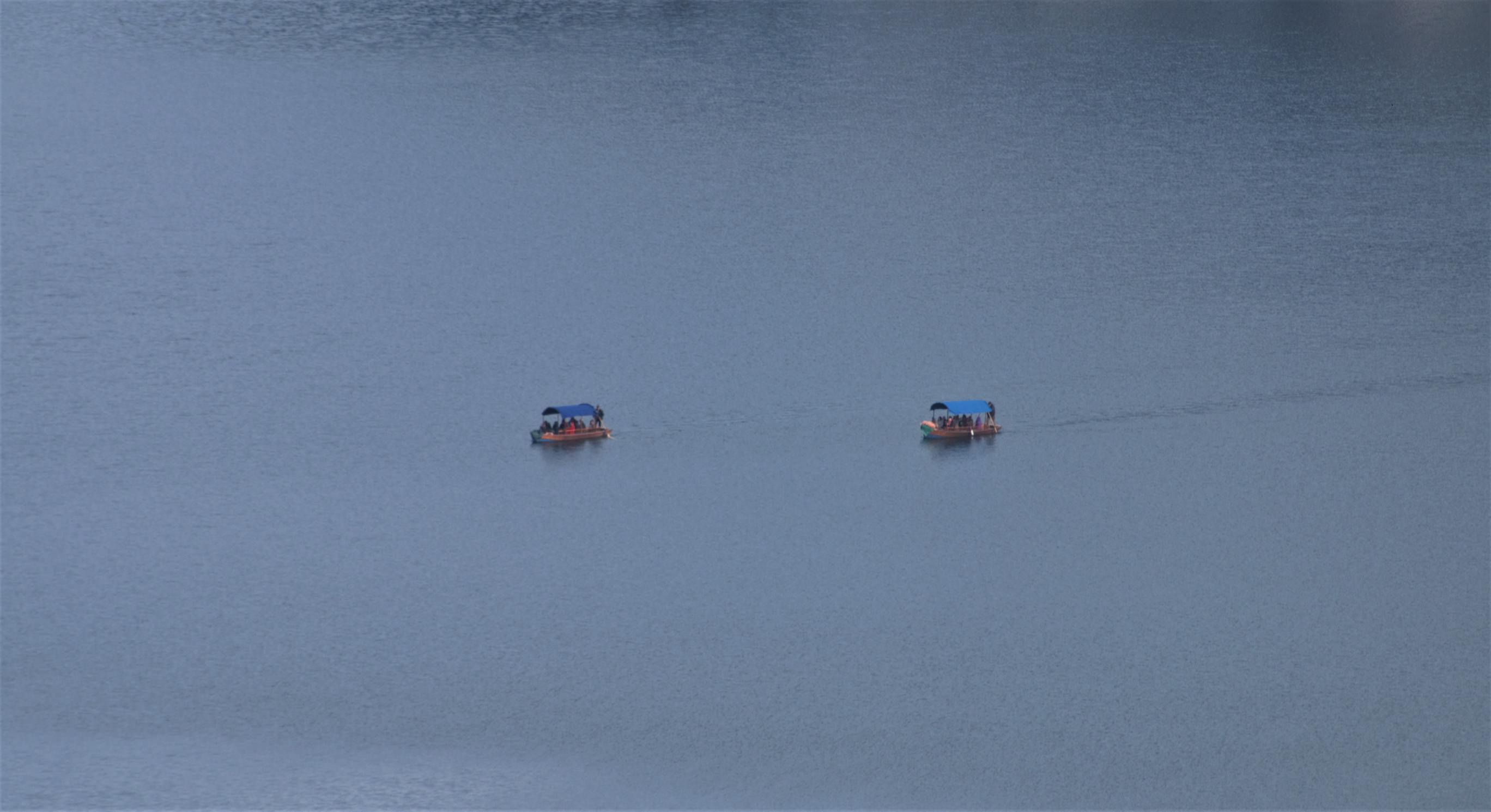 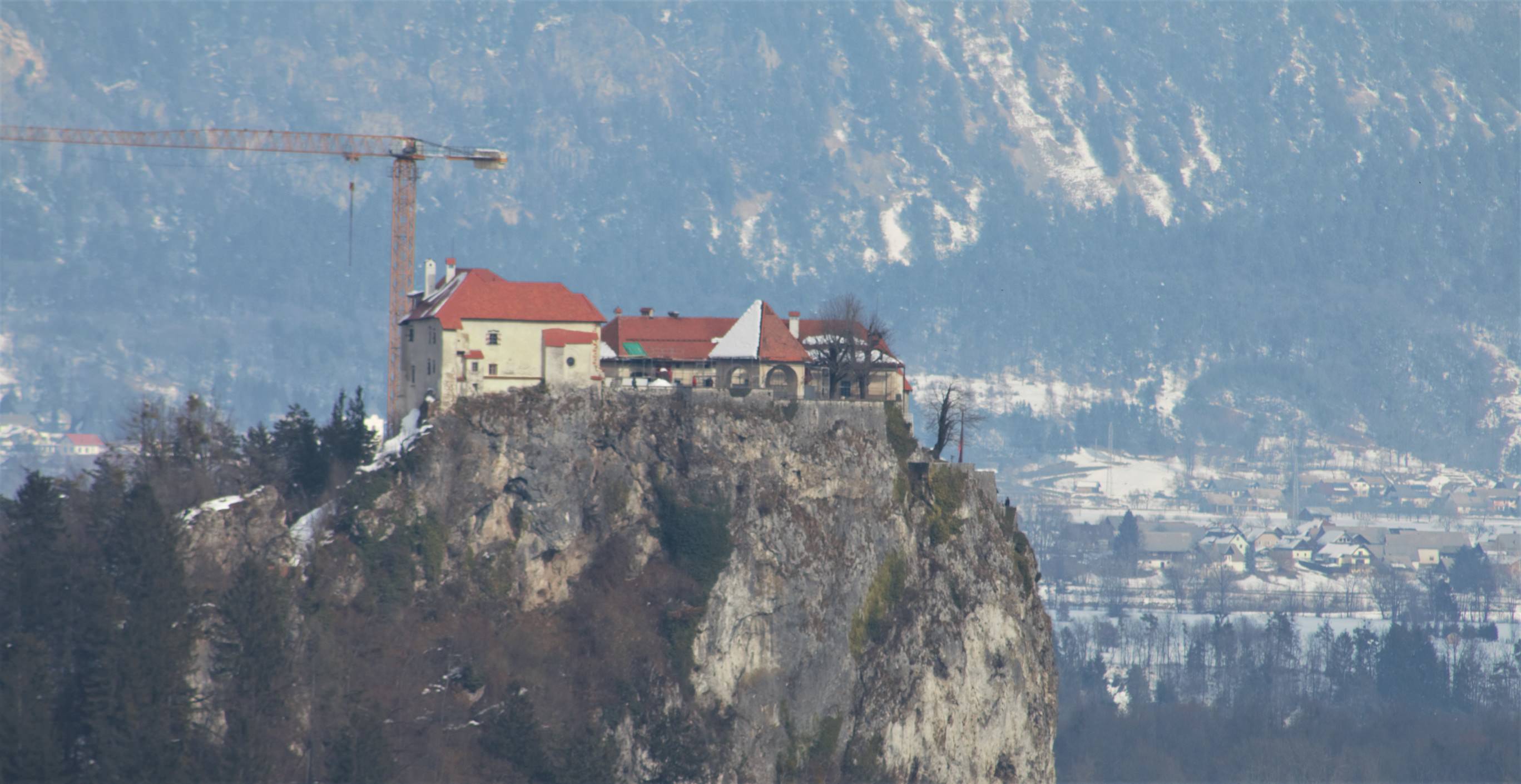 Castle Bled from the top 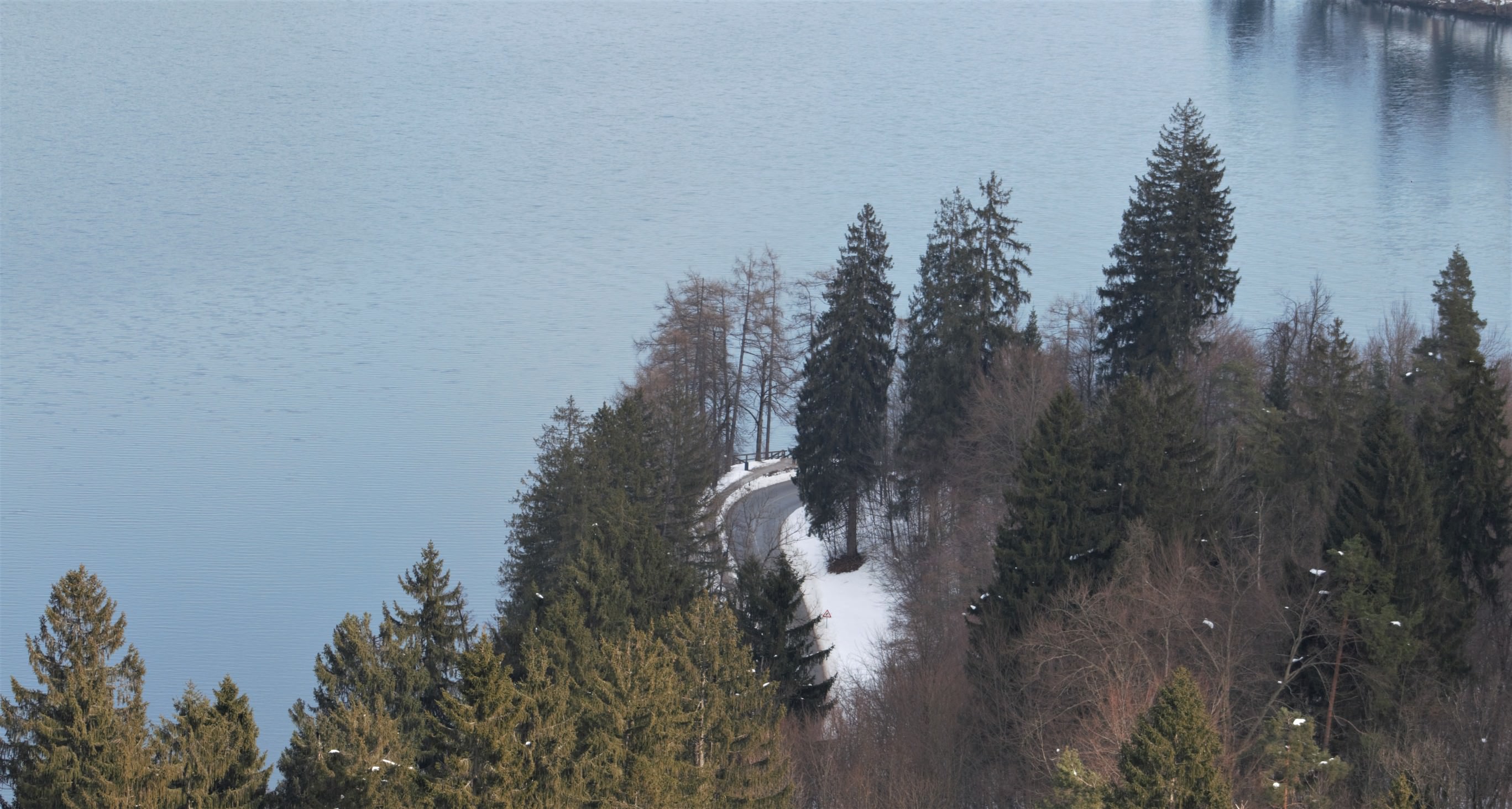 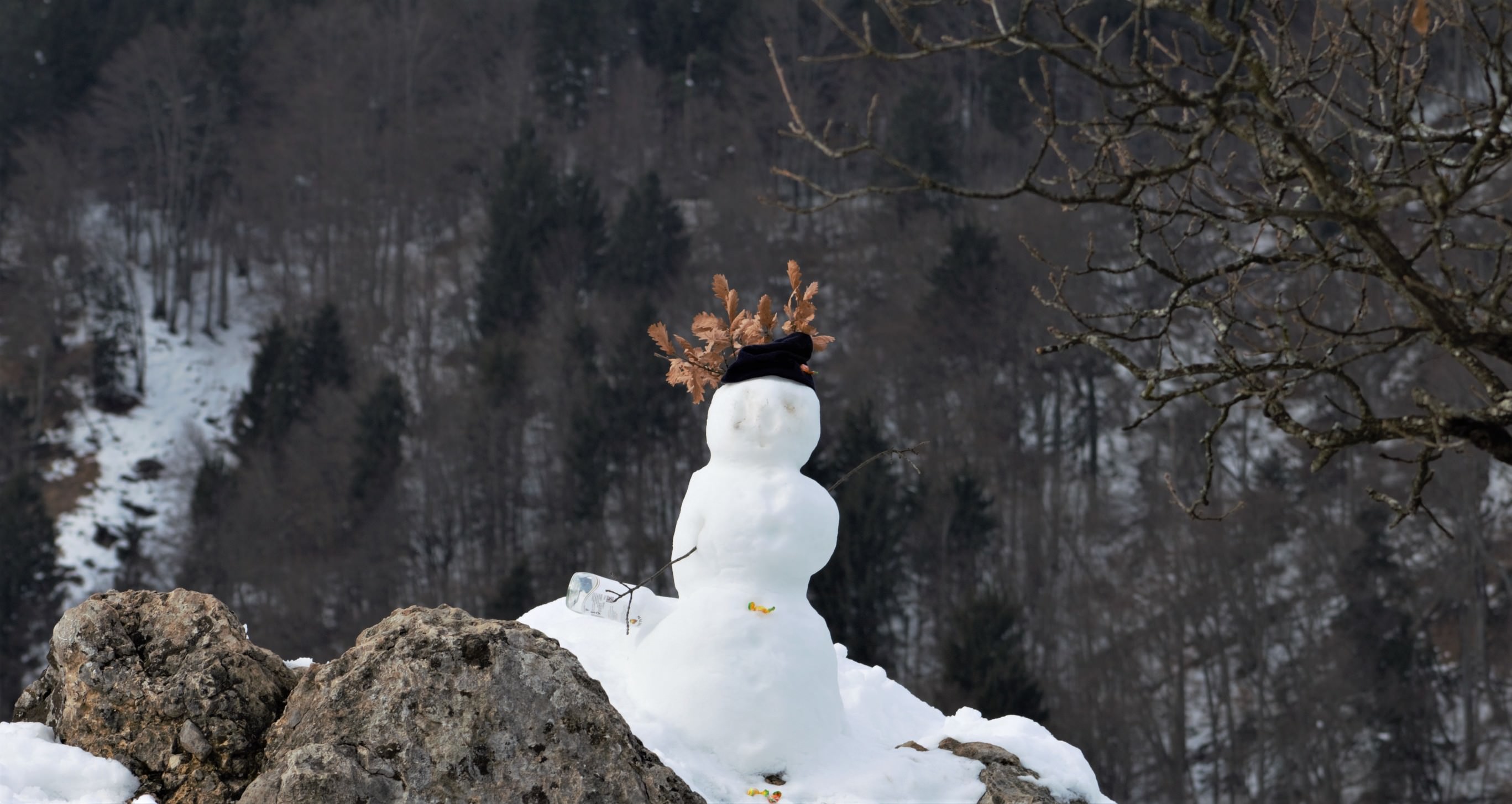 Snow Man at the top

We reached to the base and finished our walk of the lake. It was 3 pm now and we were feeling very hungry. We surrendered ourselves to a local cafe at the right. The warm coffee acted as an ointment to the pain and together with the special Bled cream cake I was in seventh heaven. 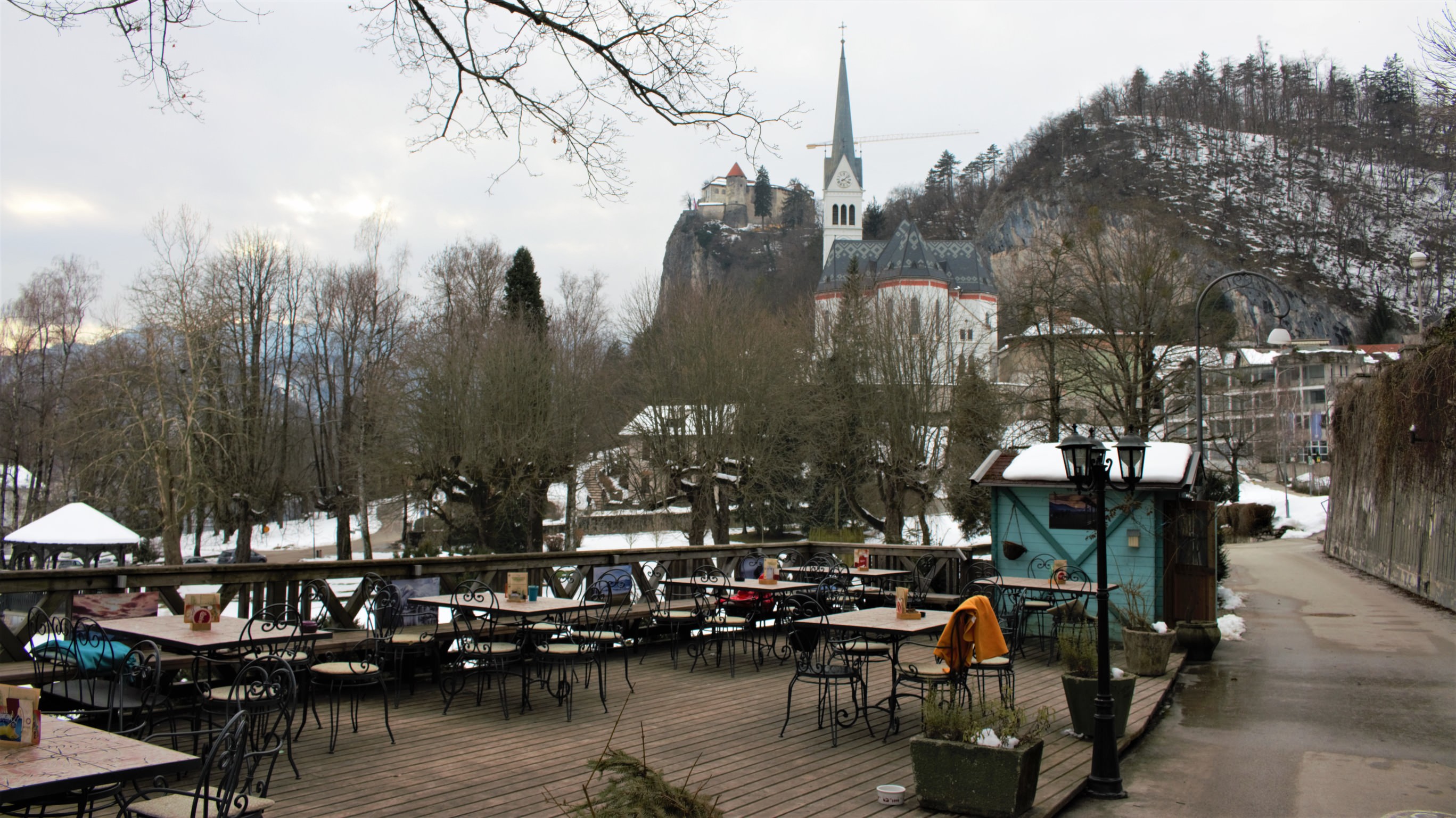 Cafe near the Lake

While I write this I find myself standing on that hilltop, my eyes fixated down on the island watching the tiny boats that looked like dots in the blue water of the turquoise lake.