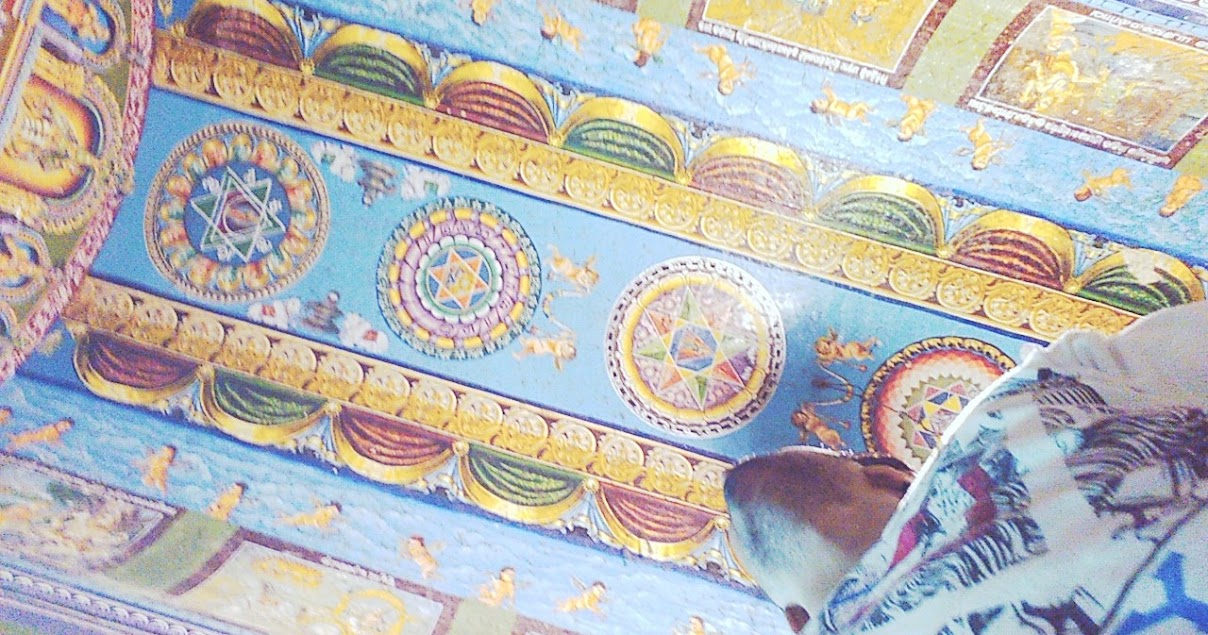 The beginning of a journey is always one of the most exciting things for a traveler. The sheer joy you get when you are headed for a new trail is something which you can’t imagine without actually going through that experience.

In first week of chennai, I really wanted to explore, visit nearby villages and see the culture of the local people. So, in all my confidence sat on a train that would lead me to some place, I planned to exit on the third station. It was a dusky evening. Went out of the station visited nearby city, drank Kope (filter coffee), ate something that was not tasty, forgot its name too. So after an hour or two of exploring I went back to the station sat in the next train to chennai. Friday Ends.

Next day planned to explore chennai all by myself. Opened google maps and found out all important and nearby places that can be covered on foot and in one day. 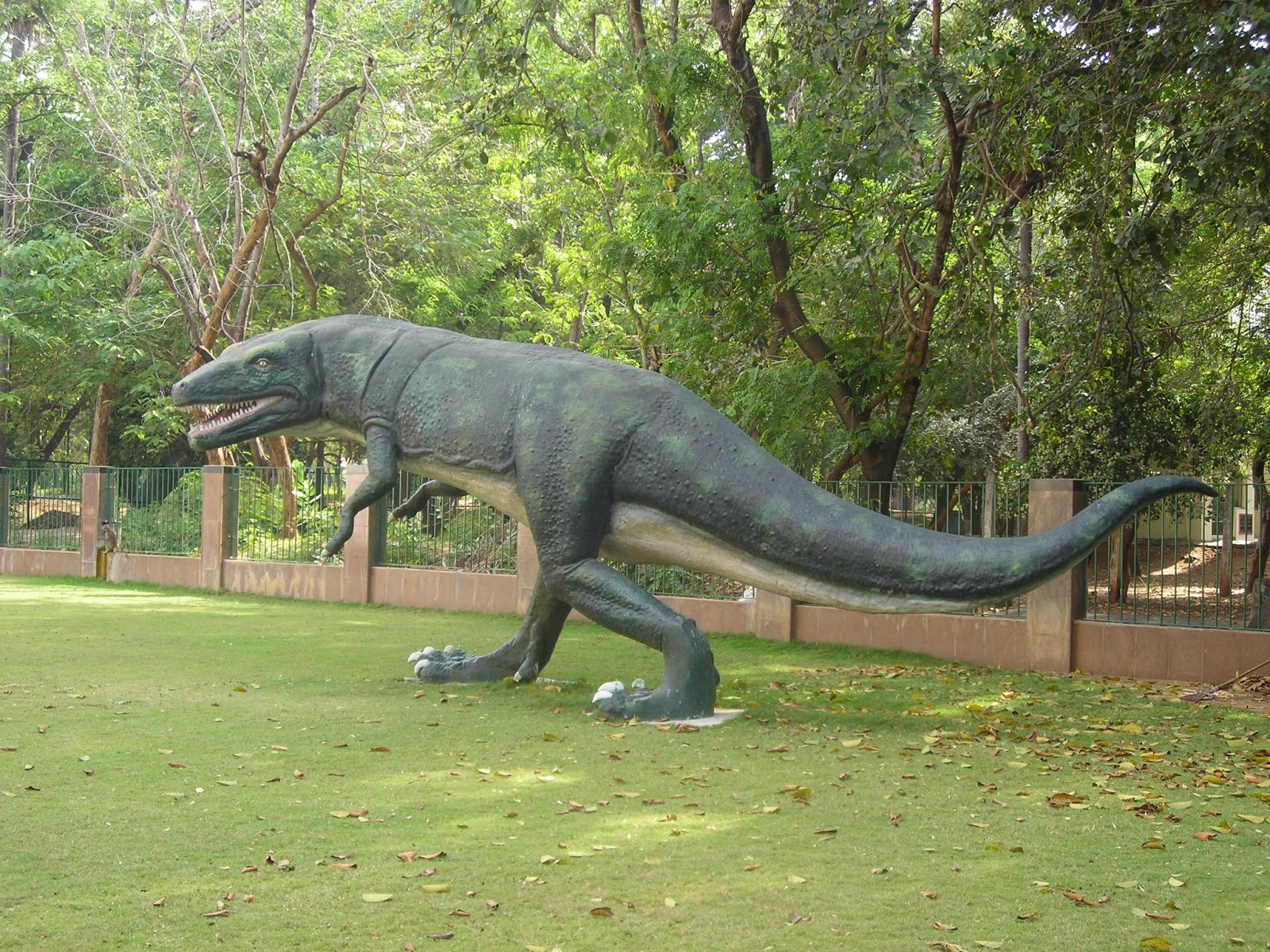 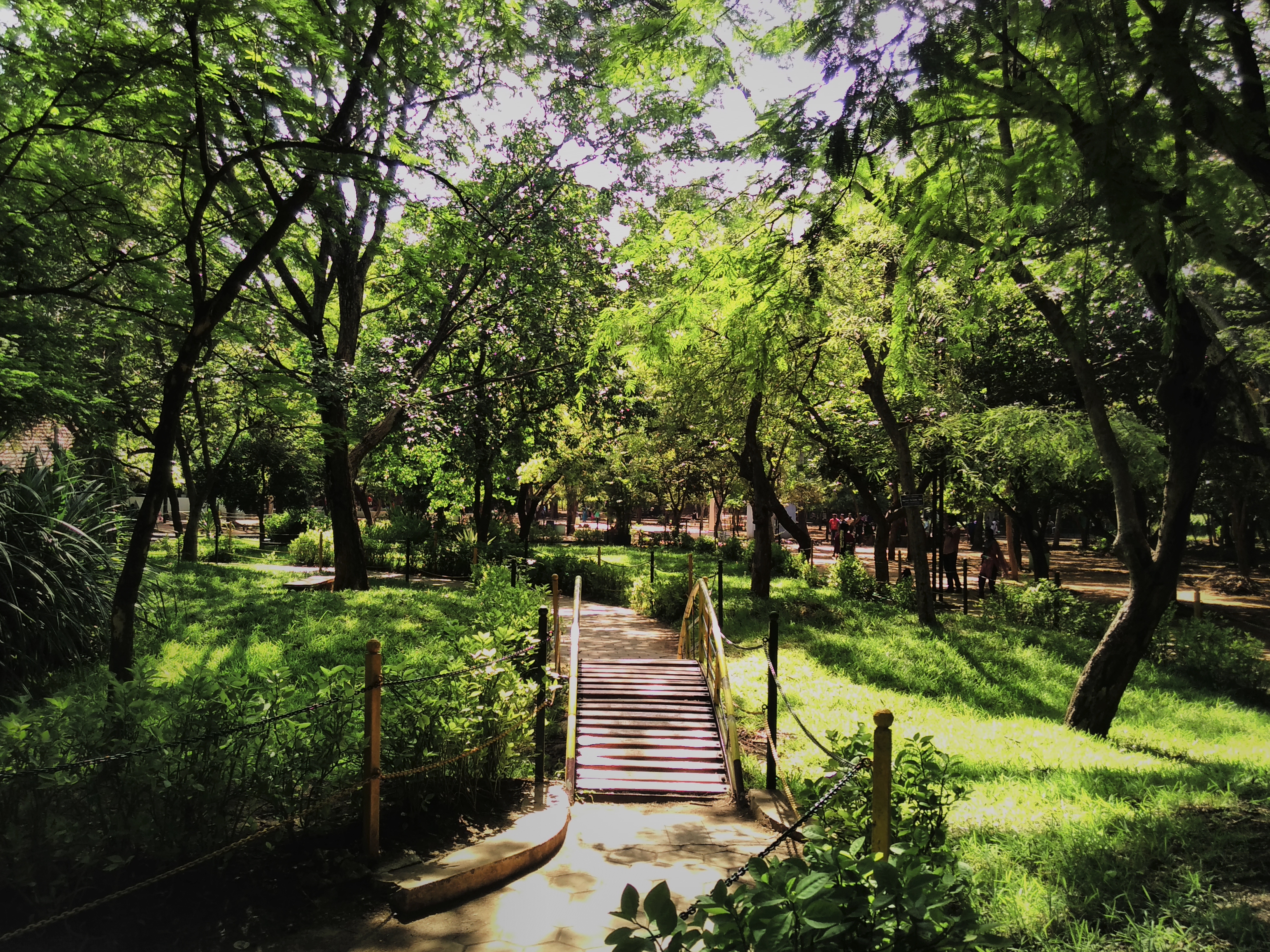 Small Bridge in the park.

In the evening I found that my long lost friend from college was also in chennai, So planned the second day to cover the remaining places with him. 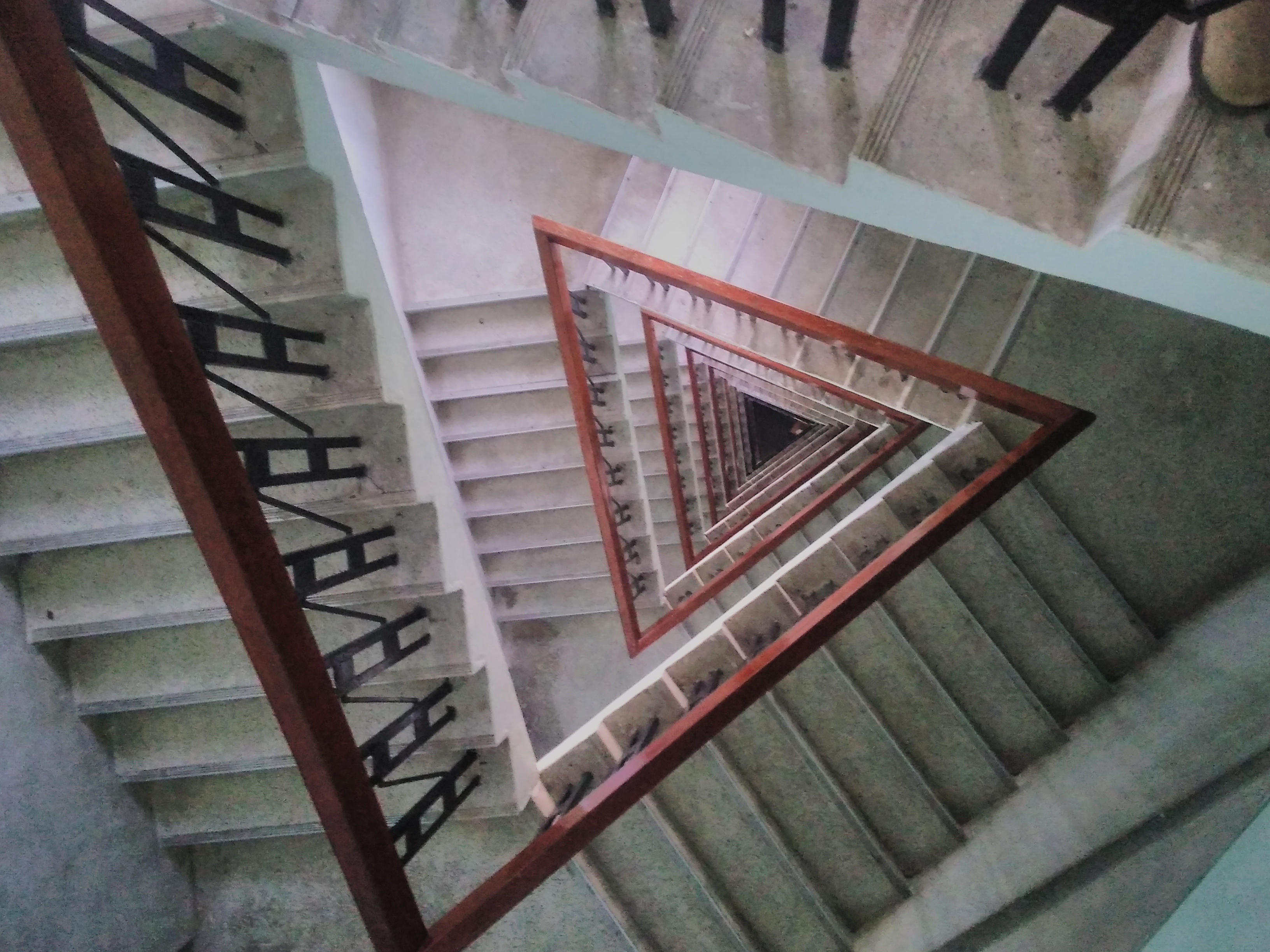 Stairs at the Marina Beach Lighthouse. 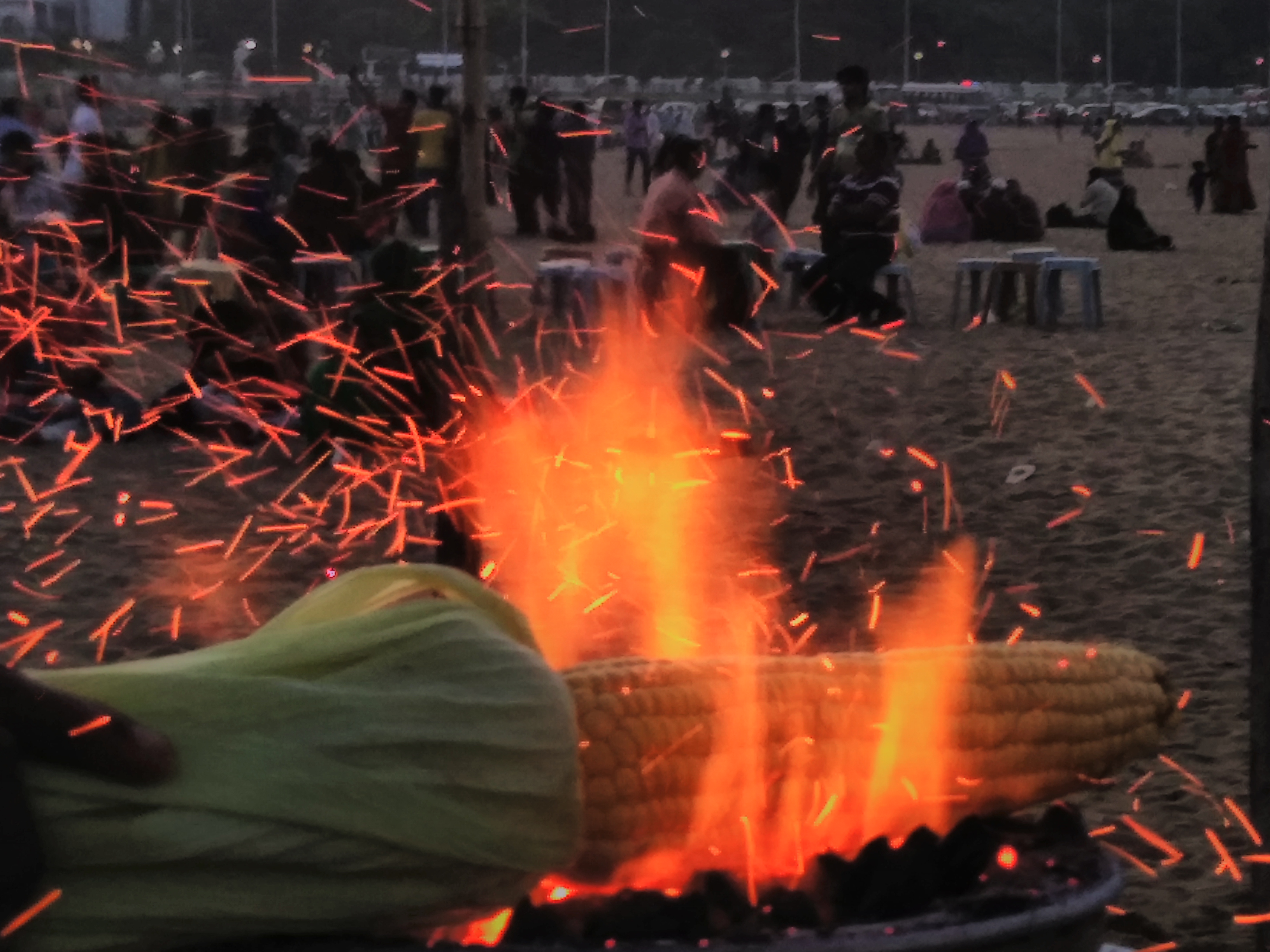 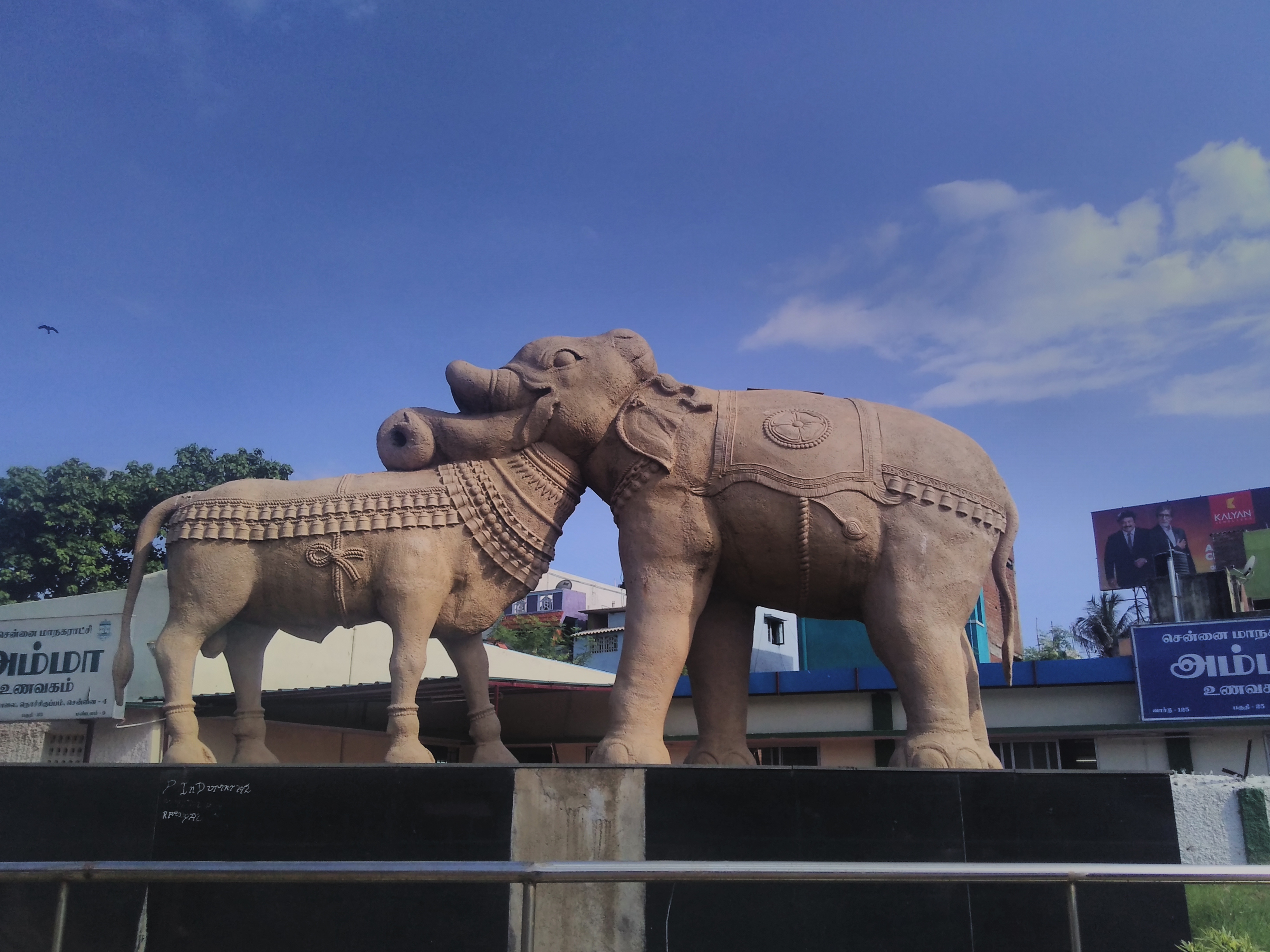 Took time to understand this sculpture

This was the most hectic, most enjoying trip in chennai. Our ambitious plan executed astonishingly well. 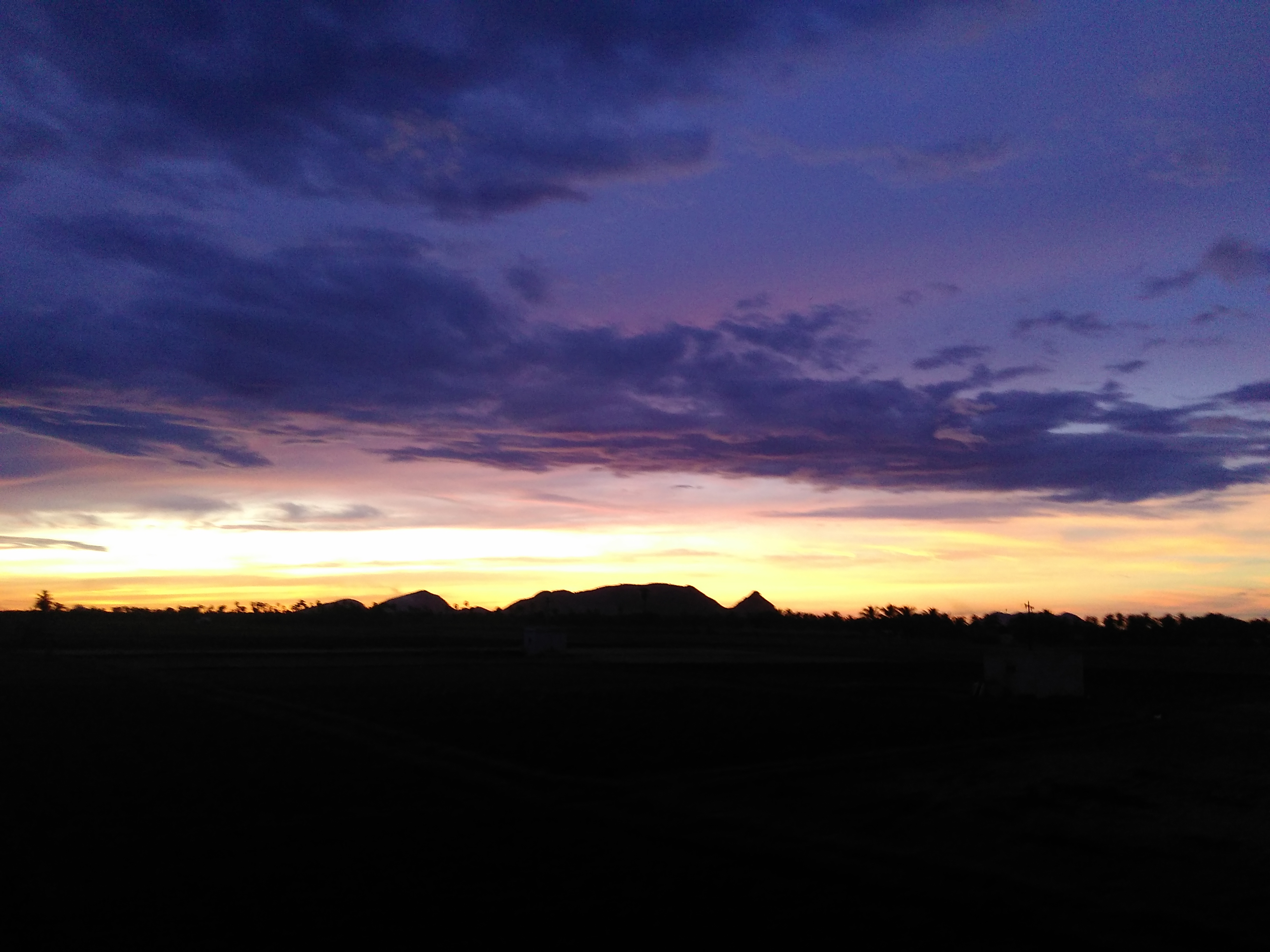 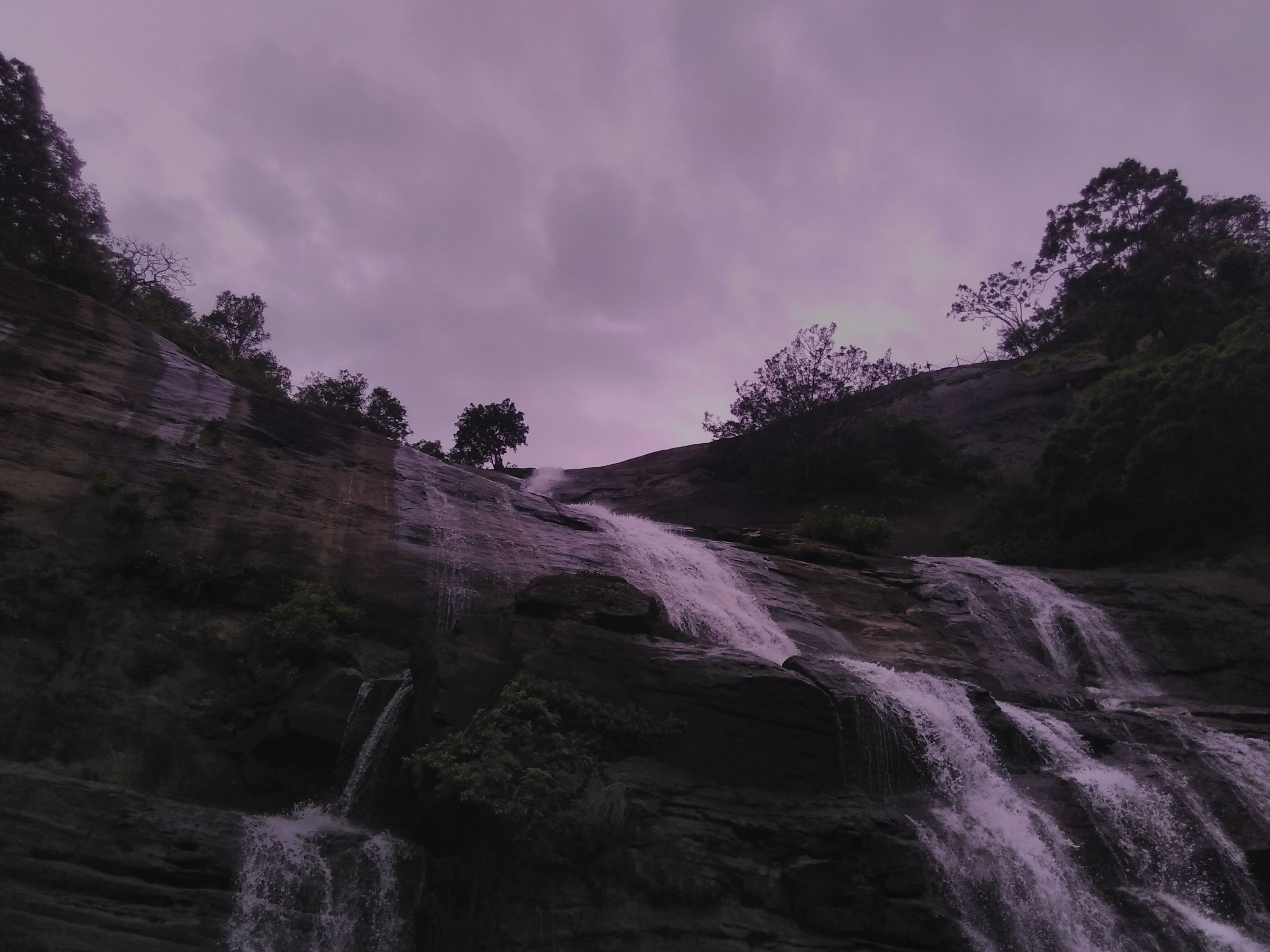 Tenkasi Courtallam: It certainly was a feast to eyes to watch the gift of mother-nature. How grayish clouds kisses the forehead of uneven hills, and out of nowhere we found ourselves in this land of multiple falls. First we visited main falls which was very over crowded we had literally had no place to place foot. But were there is water there are people, and where there are people there is life. Enjoyed the view there for a while and then we moved to Five Falls. 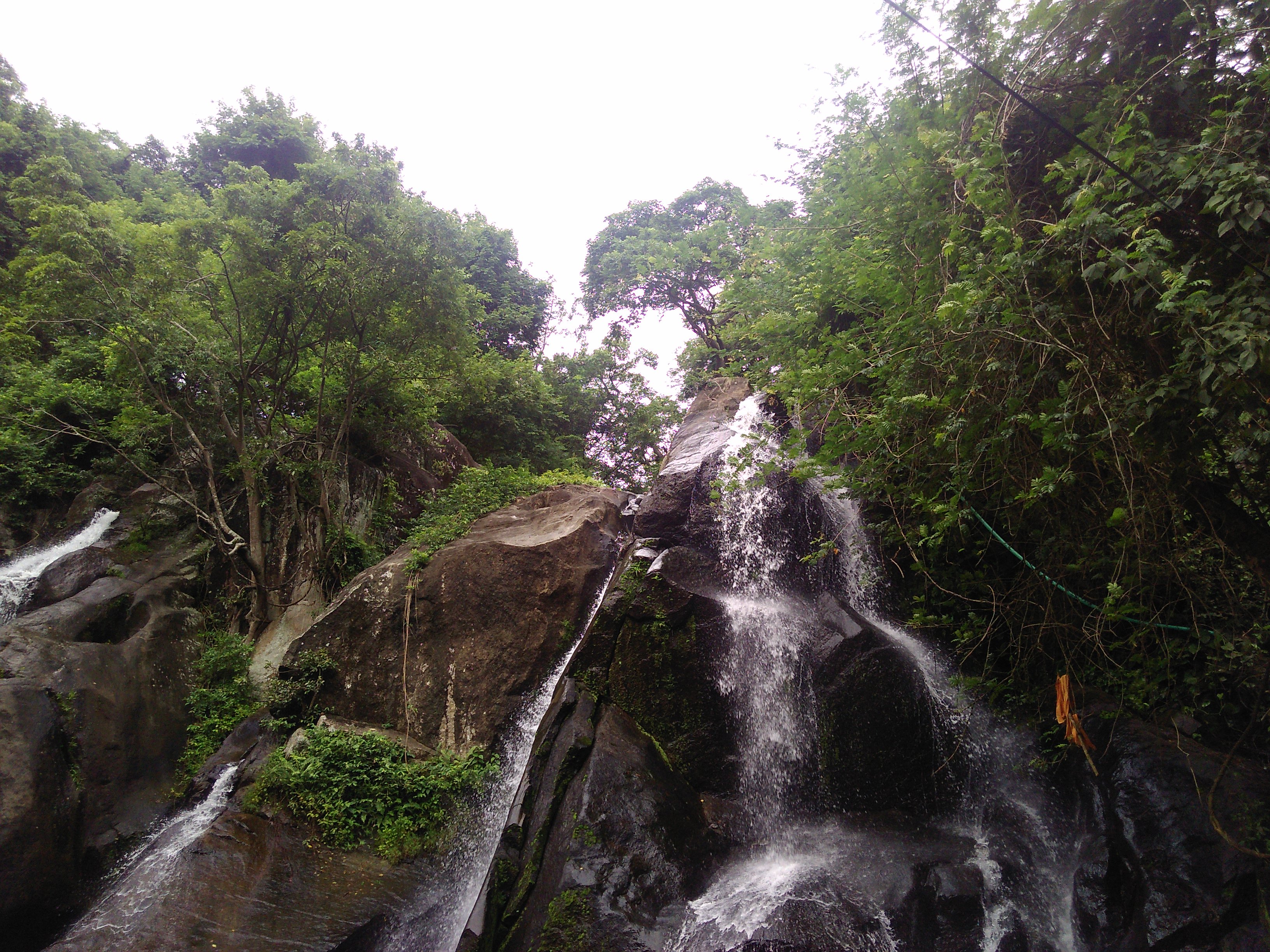 The falls were amazing. In a split second we jumped right in. The experience of the chilled water droplets falling straight on you was liberating. Just can’t be explained in words. A while later shivering with cold we decided to move on and explore the city.In the city we tasted a variety of street food. Out of all things we tasted Egg Barota stood away which is made by mashing up Parota and Egg. Spicey treat served on banana leaves. 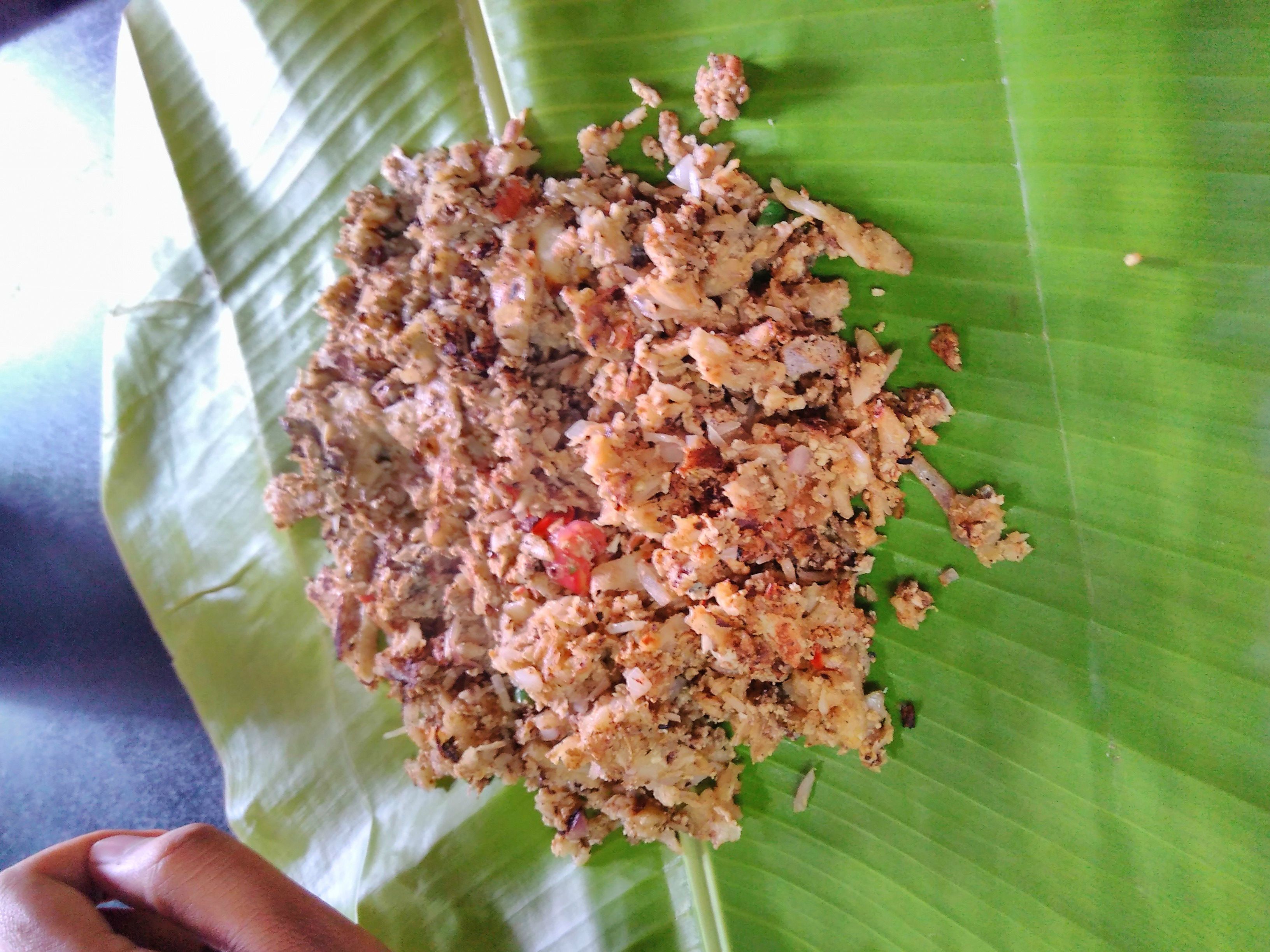 From there we took a sleepy 5 hour bus ride to kanyakumari. Checked in our cheap-ass but grand hotel thanks to makemytrip discount coupons. In the evening we set foot on the coast to explore the area. Then saw Gandhi memorial, triveni sangam (where 3 seas meet). By 5:30 pm when we were thinking of making our way back to the hotel we saw a golf cart. Unknowing where it will take us we hopped in. 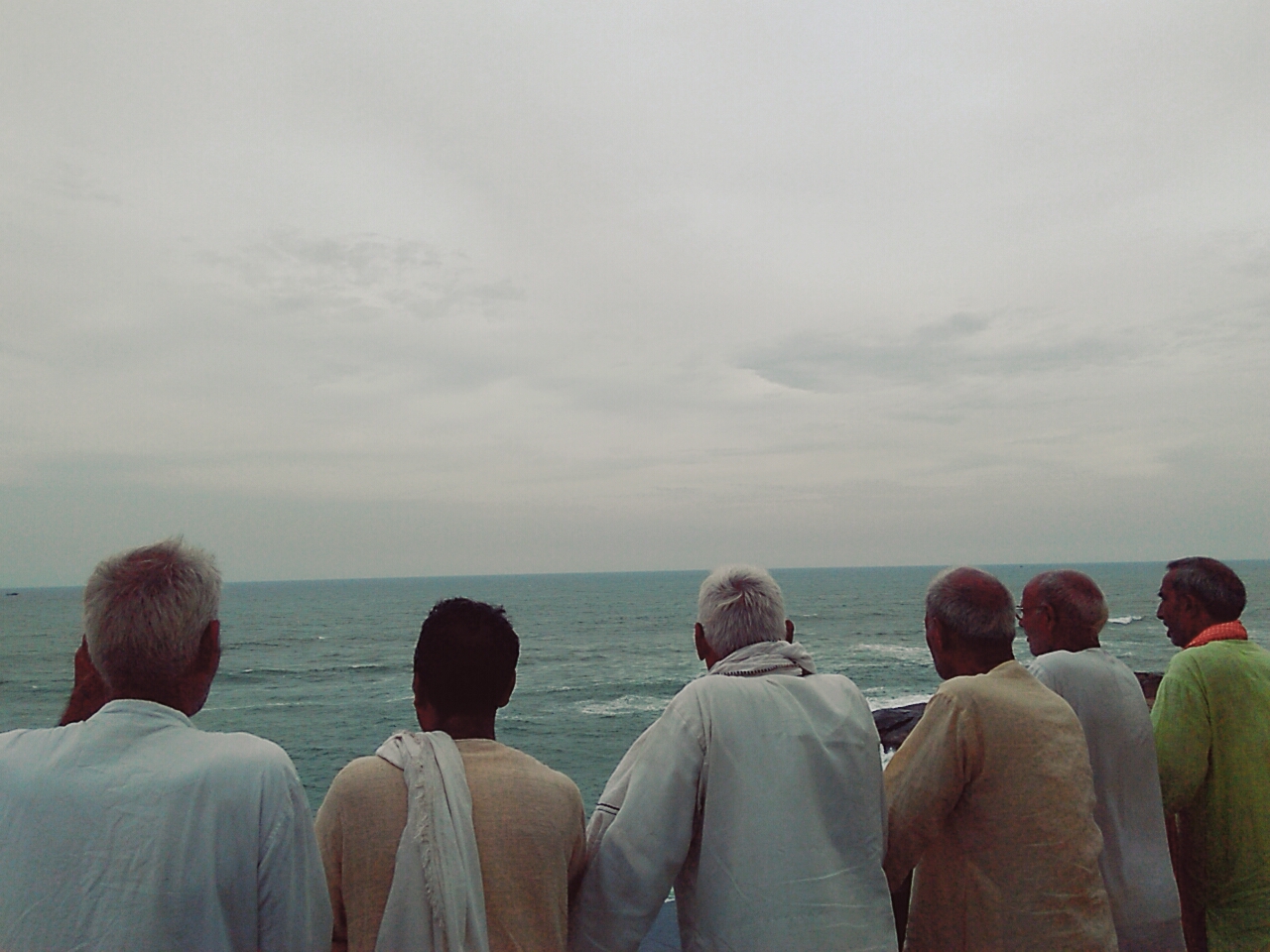 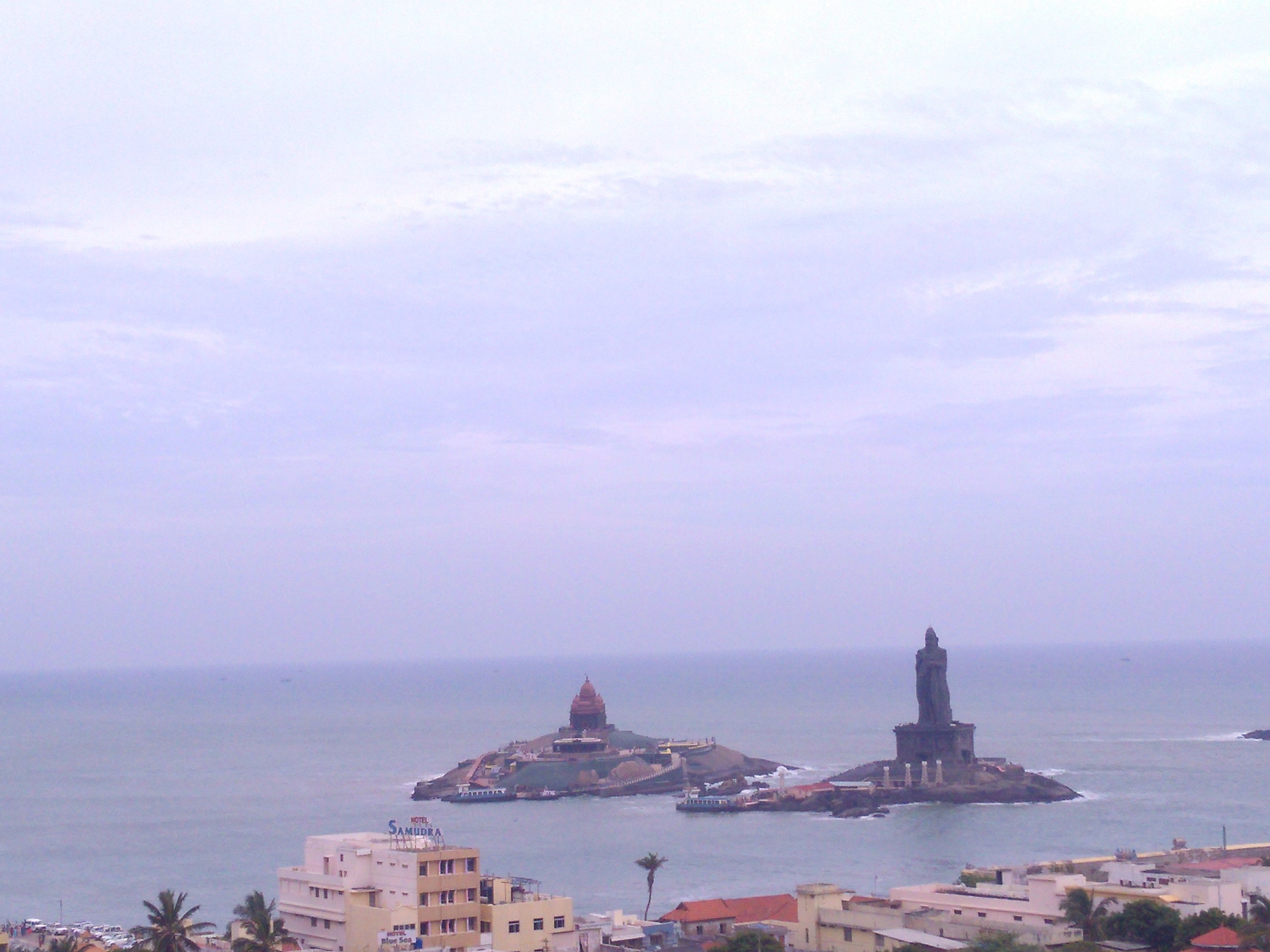 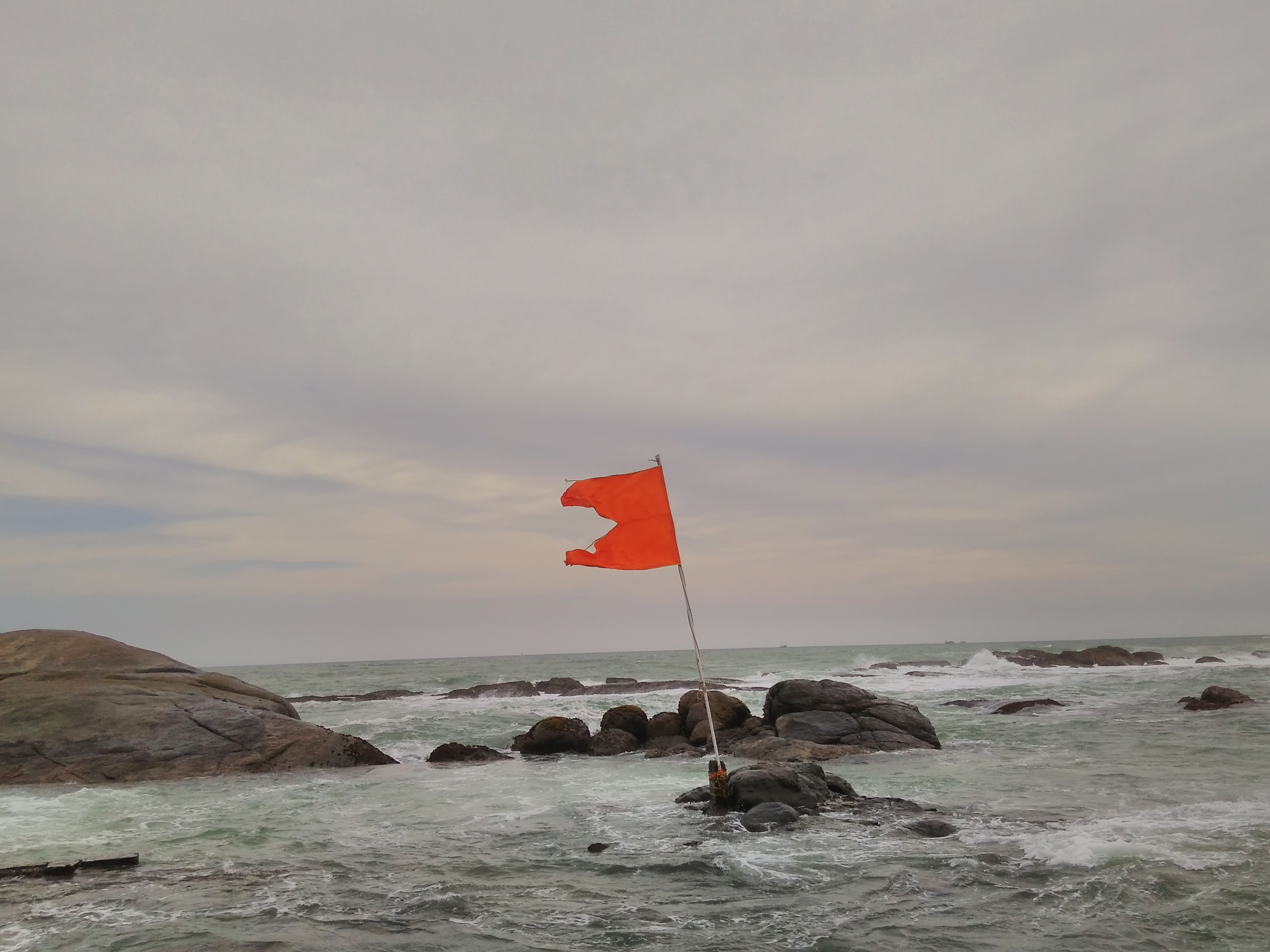 The Sangam, Where the waters meet 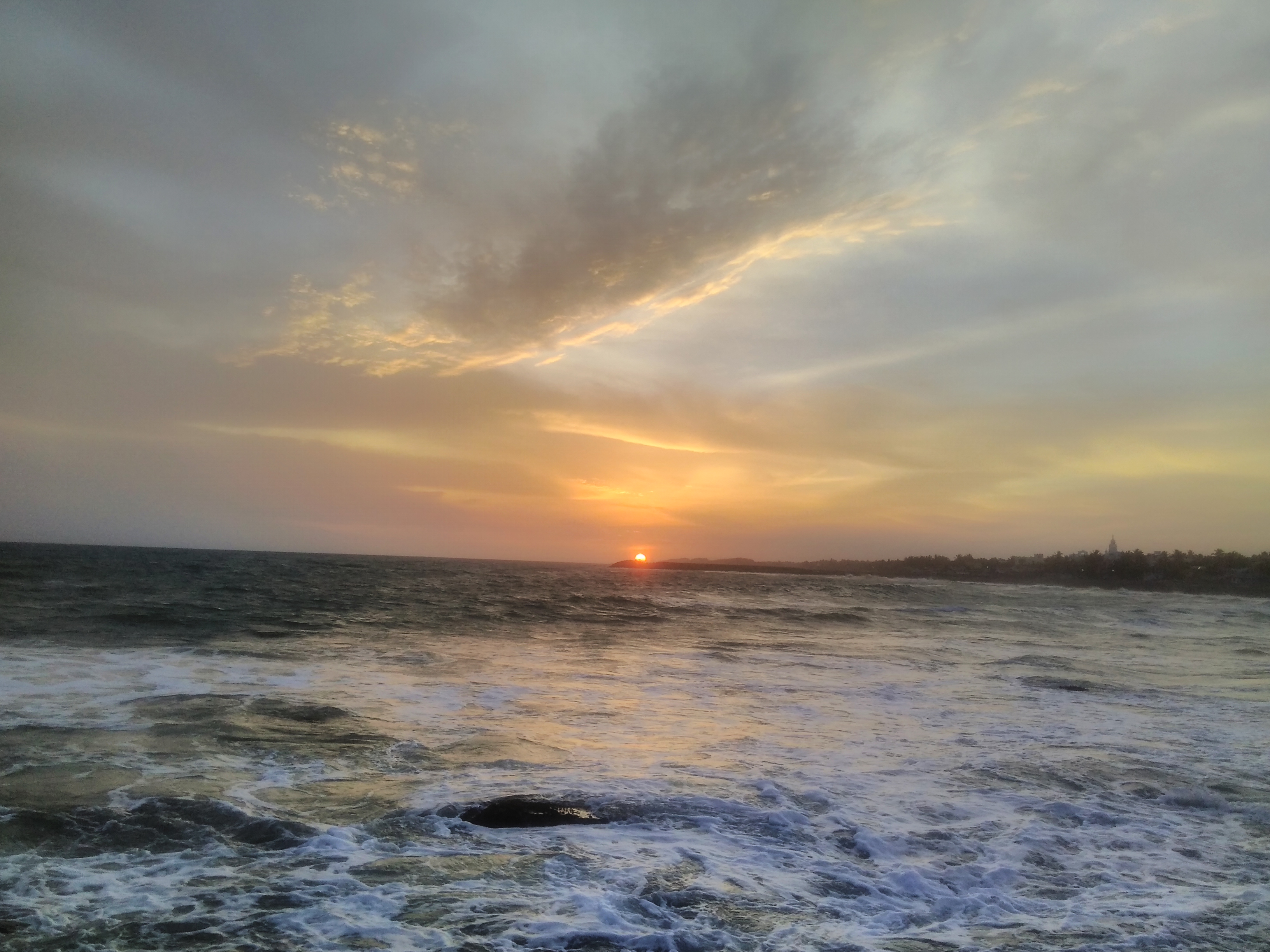 To Our amazement we found ourselves in the hidden twin beaches. The view of the infinity vast ocean was very captivating. From here reached the sunset point, took some pre-sunset snaps. The weather was very clear to see the sunset. We watched with an unwavering gaze that famous sunset, as the mighty orb of light slowly sank beneath the horizon, and threads of light lingered in the sky, first orange, then red, then dark blue, until all that was left of the sun was the afterglow. In this particular moment something inside me grew more fonder. 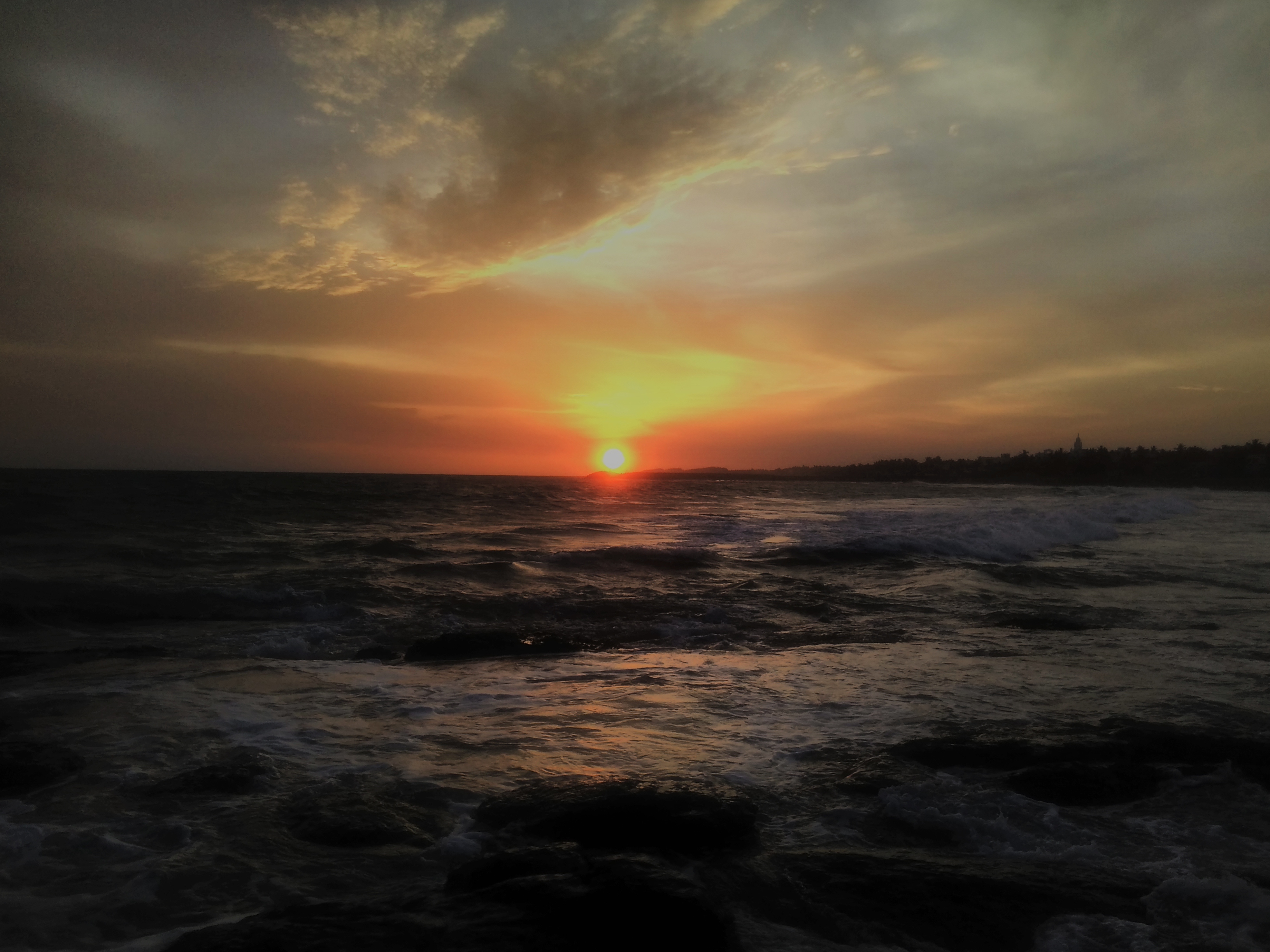 Moved back to the hotel with an great memory and a heavy heart.In the night visited local markets and lonely roads of the city. The city view from our hotel was also very colossal the brilliant stars in a twilight sky kept us questioning the meaning of everything. 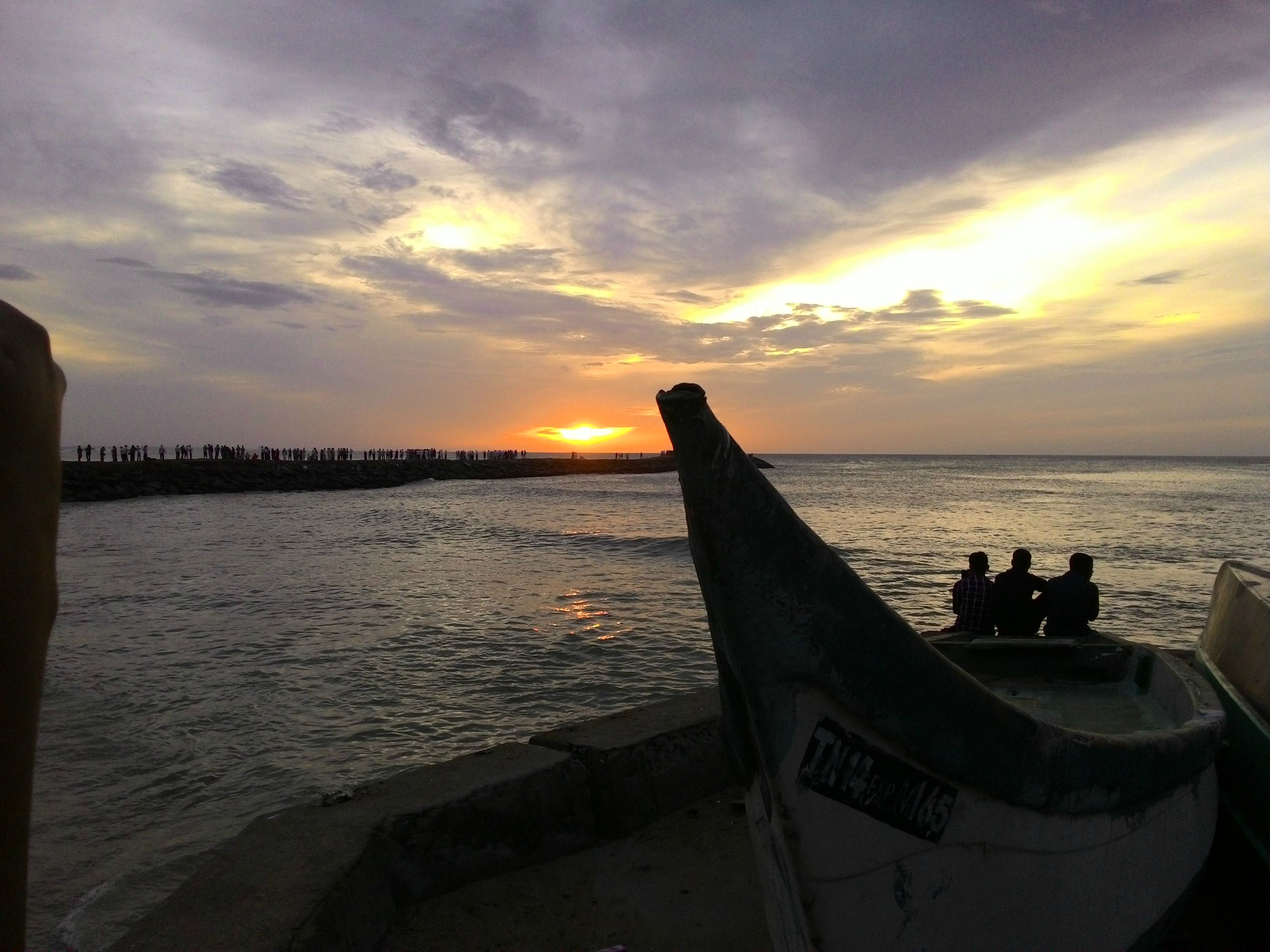 Woke up early in the morning so that we don’t miss the sunrise. But the weather didn’t helped us today. Still the soft amber glow from the sun grew and filled the mighty sky and clouds with colours of red and orange, the tricolored sea somehow turned more blueish. 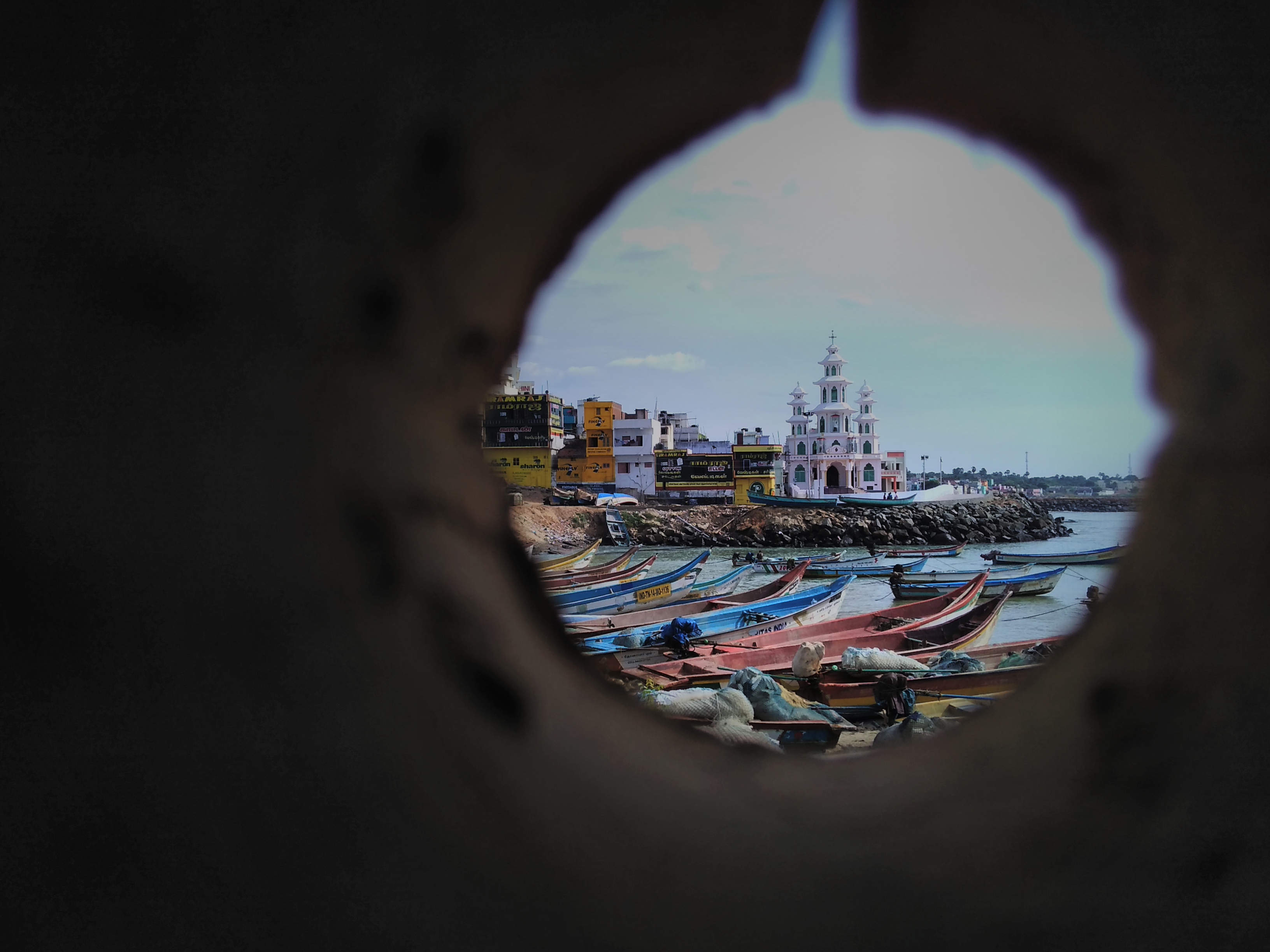 View of church from jetty station. 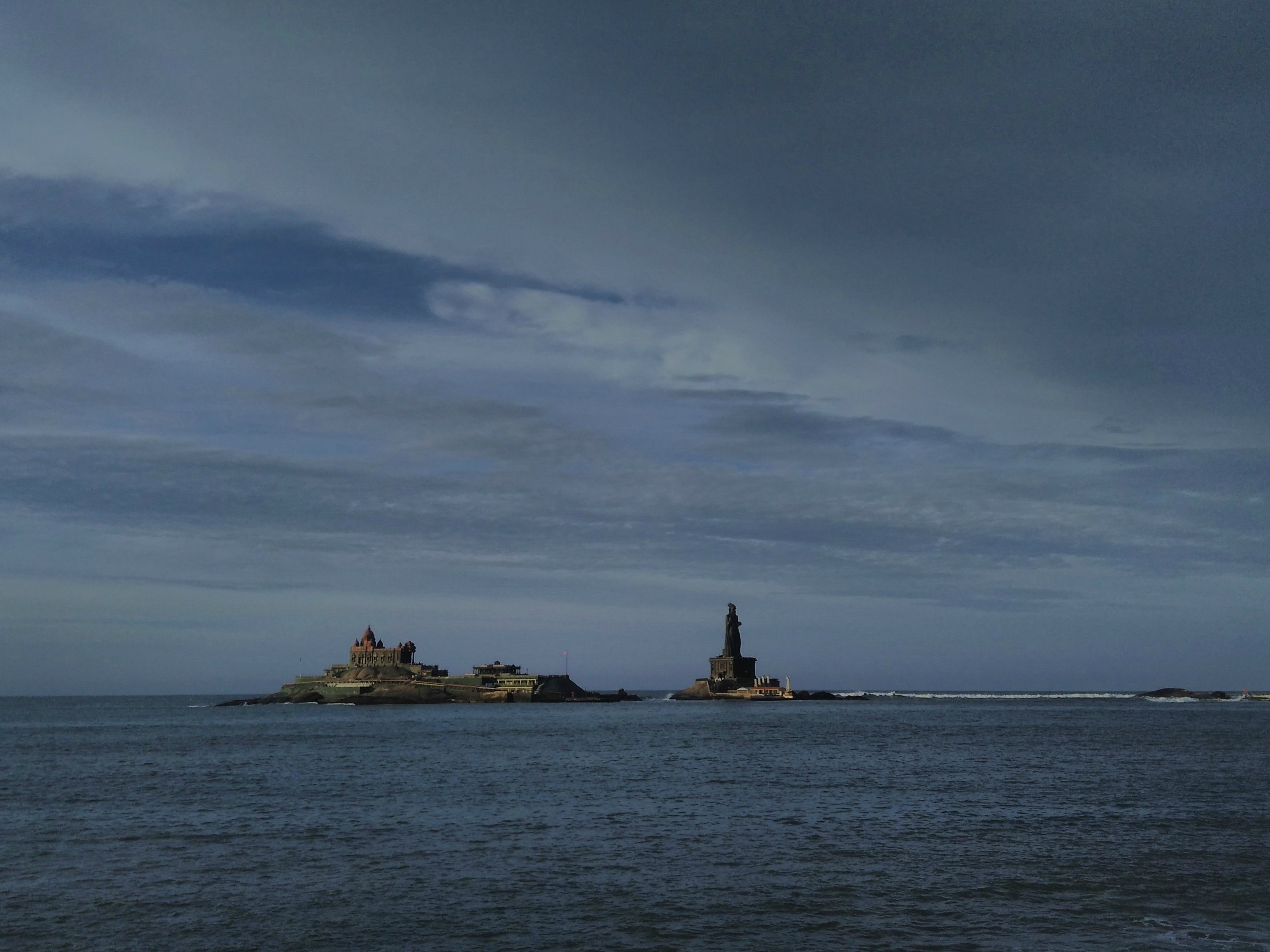 From there we took a jetty to the Vivekananda Rock Memorial. Thiruvalluvar Statue is mighty and effectively portrays the love of tamilians towards their culture. Brought some books from the Vivekananda rock memorial and again went to explore the city. Left from there and saw many windmills and was very tempted to go there. On our way back the view was very delightful. I could see 4 things in quantity windmills, Coconut trees, Banana trees and hills.

We reached Madurai at 7:00 pm in the evening and our bus was at 10:00 pm so we decided to explore the city. Since the time was less we were left to pick only place. So we decided to visit Meenakshi amman temple. The temple is the most prominent, sacred landmark and most visited tourist attraction in the city. It boasts of its magnificent architecture and historical relevance. 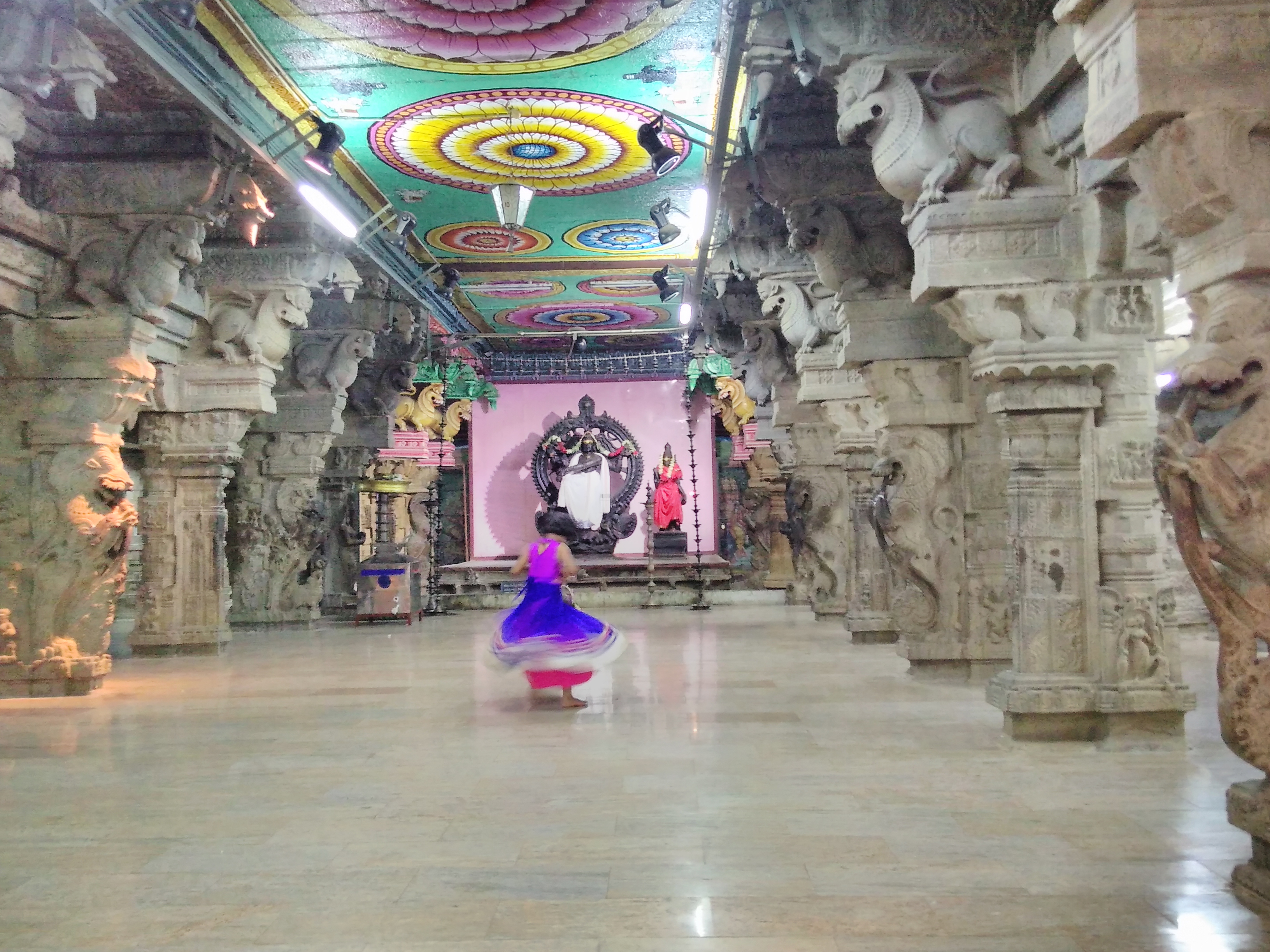 Due to some personal reasons i didn’t wanted to visit the temple but really wanted to explore the magnificent architecture and temple museum, So i decided not to go in the main area but explore the architecture. The size of this temple is massive and the whole city was laid out in the shape of square with a series of concentric streets culminating from the temple (amazing isn’t it).

I was wearing shorts and didn’t knew that the visitors were required to wear full dresses before going inside. Was warned by my friends but i didn’t cared back then. Next, I was given a mundu(lungi) to wear by the temple staff and then we went inside. The architecture was echoing grandeur and magnificence. It was sad to see that the temple(the shrine) prohibited the entry of non-hindus. According to me prohibiting someone on the basis of religion defies the basic aspect of sanathan dharma.

Then we visited the 1000 pillars hall museum, captured the exotic architecture and memories and returned to the bus stand after returning the lungi.

This weekend was the cherry on top of my tamilnadu trails. Two of my best buddies came over to chennai to visit pondicherry and nearby places. We started off at 9:00 am and took a bus to mahabalipuram. There we visited a group of monuments that have been classified as a UNESCO World Heritage Site. 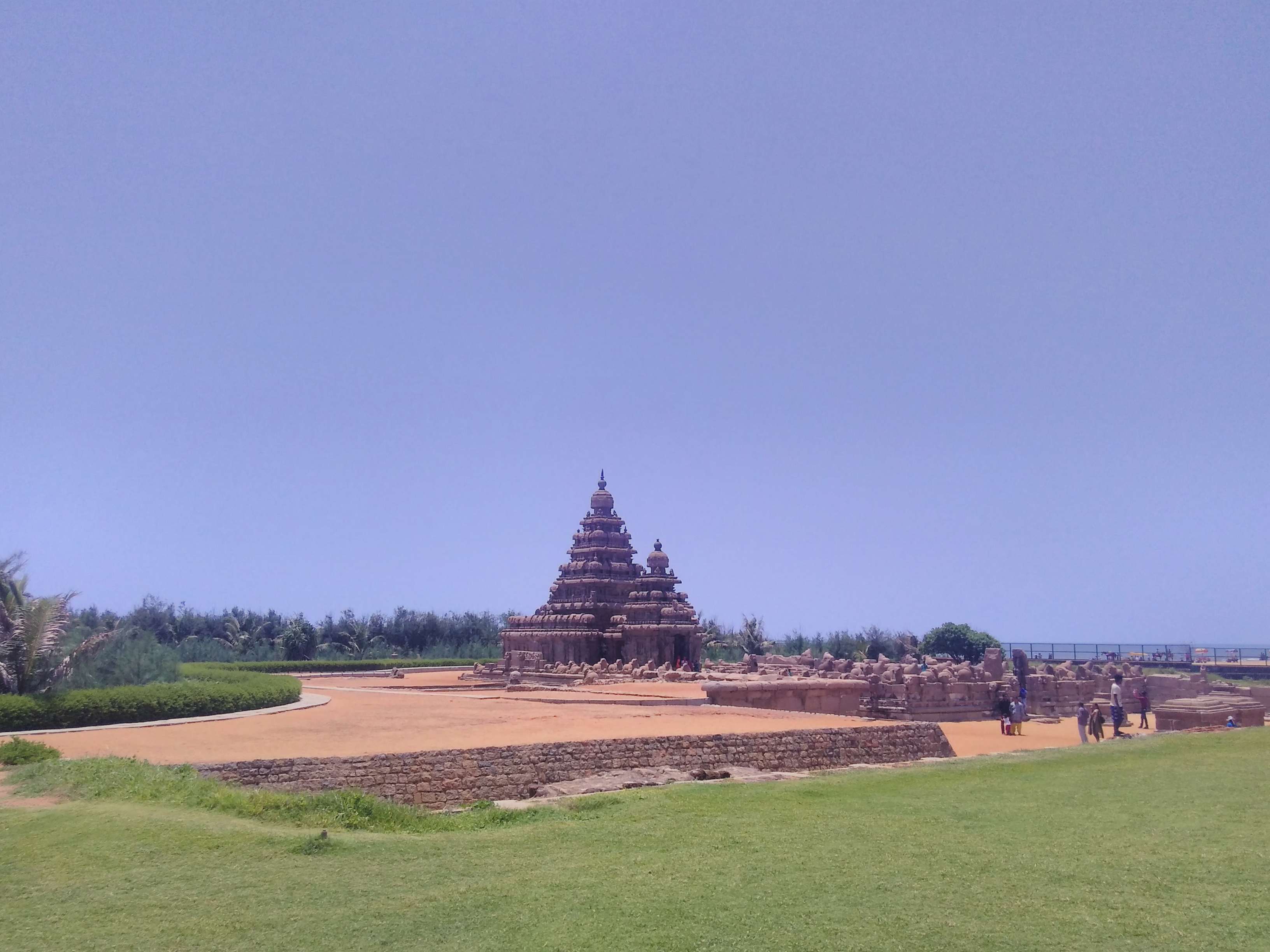 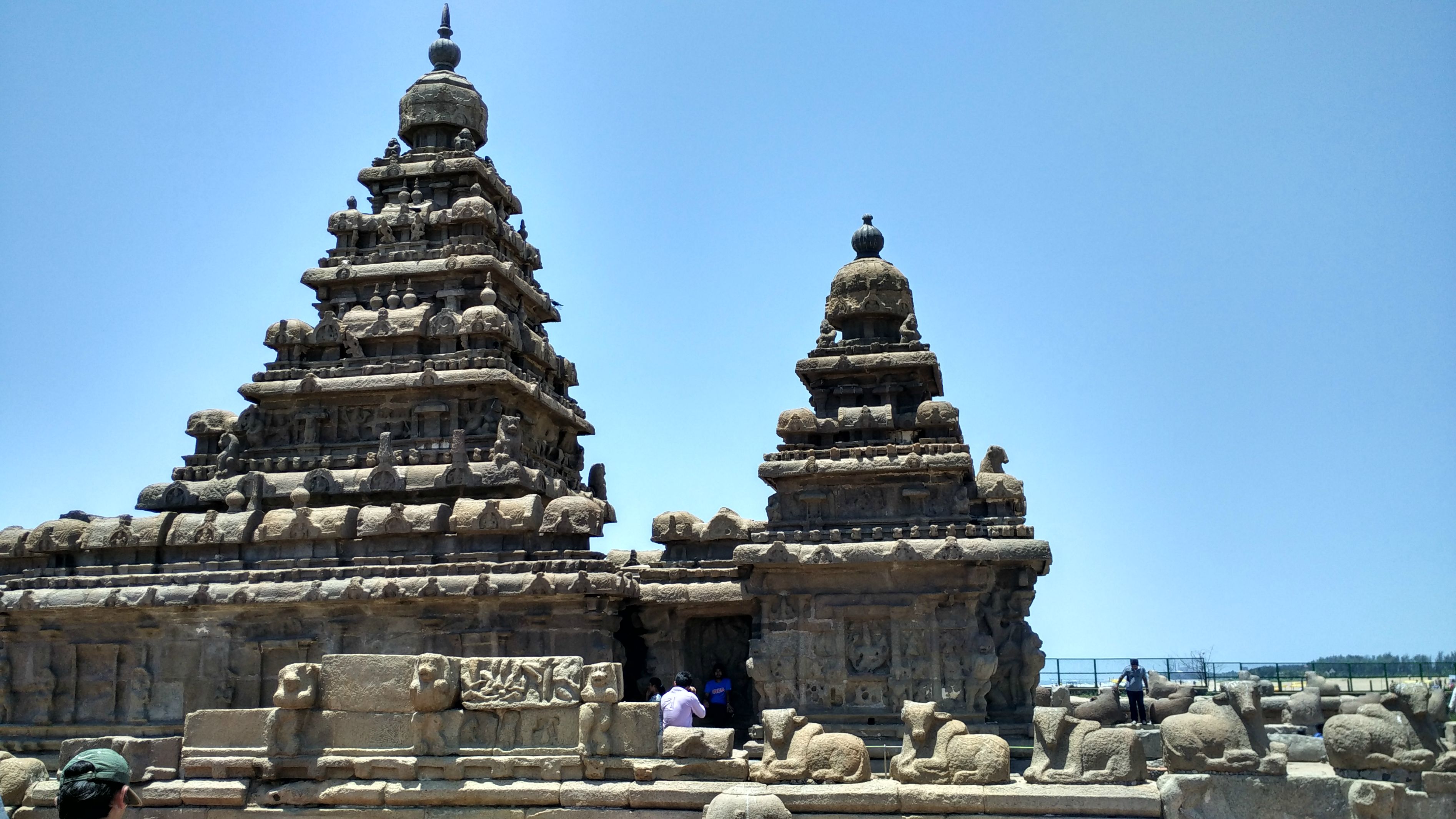 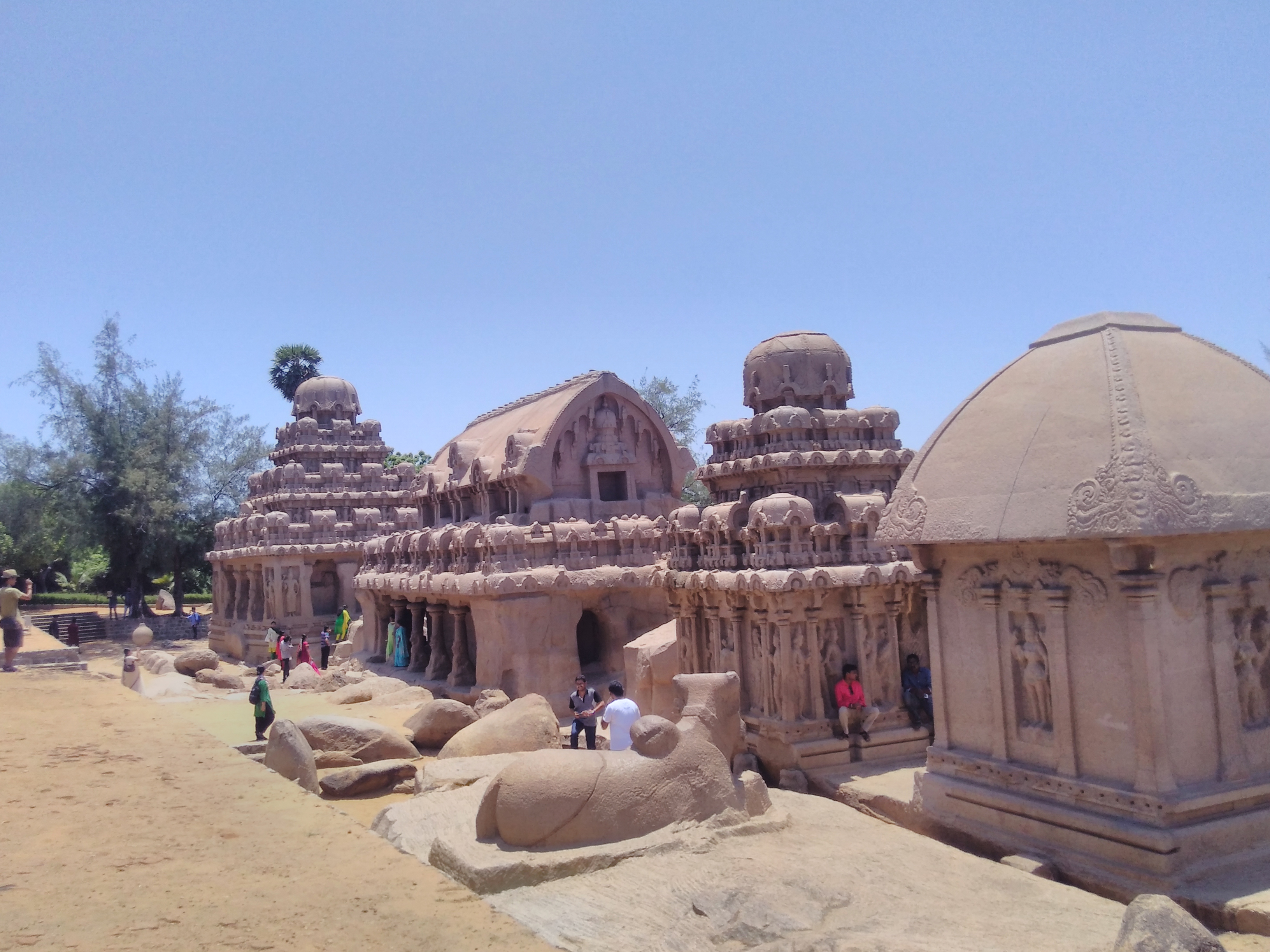 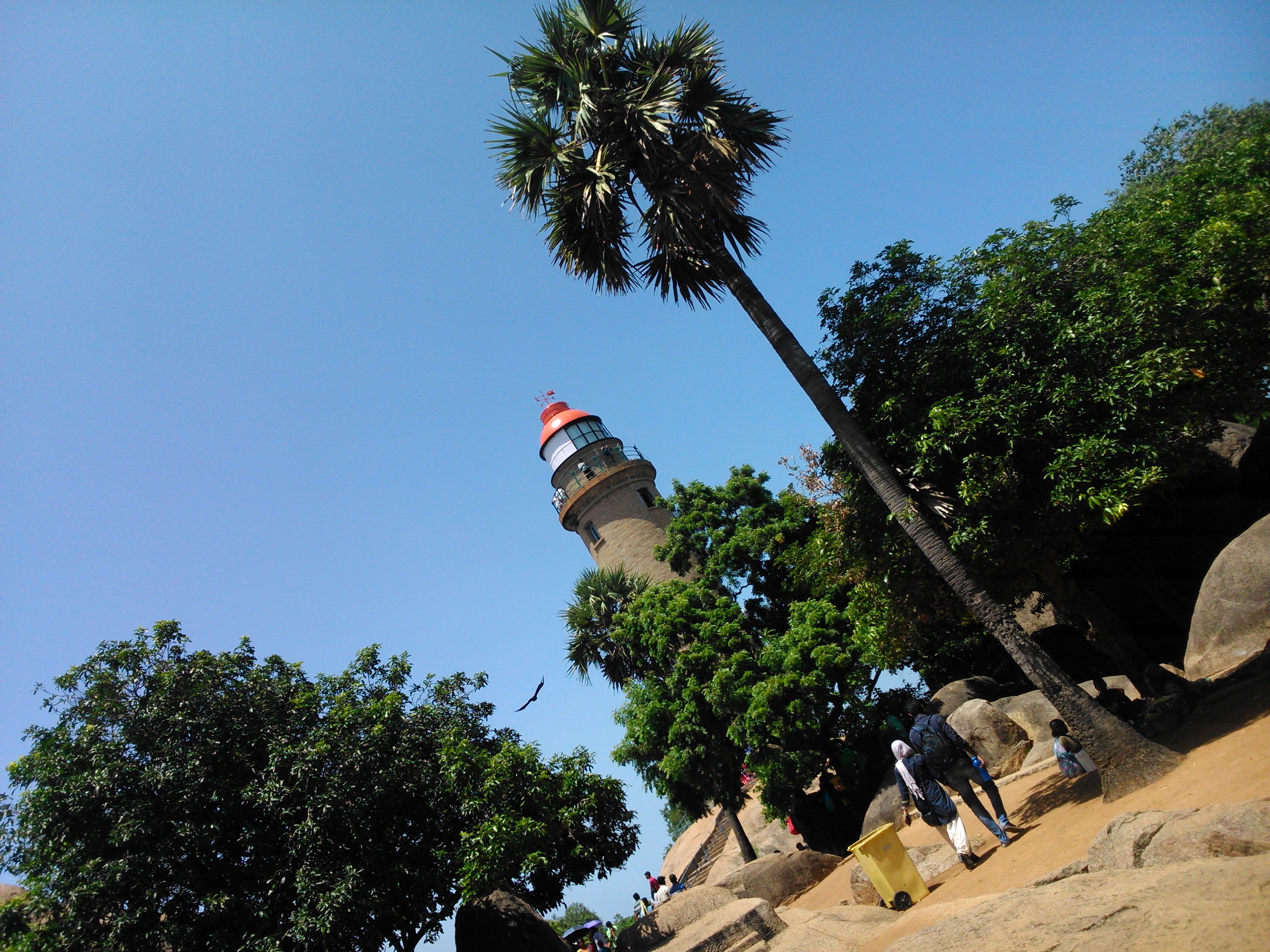 From Mahabalipuram we went to pondicherry, reached pondi pretty late in the evening. Went to Gandhi beach after resting a bit in the hotel room. To our luck that night was a full moon night and the sea view from the shore was just out out the world. Gleaming moon with a halo of orange tinge in the middle of the horizon in a clear sky took my breaths away. The refection of the moon in the night sea looked like molten silver making the landscape just perfect. 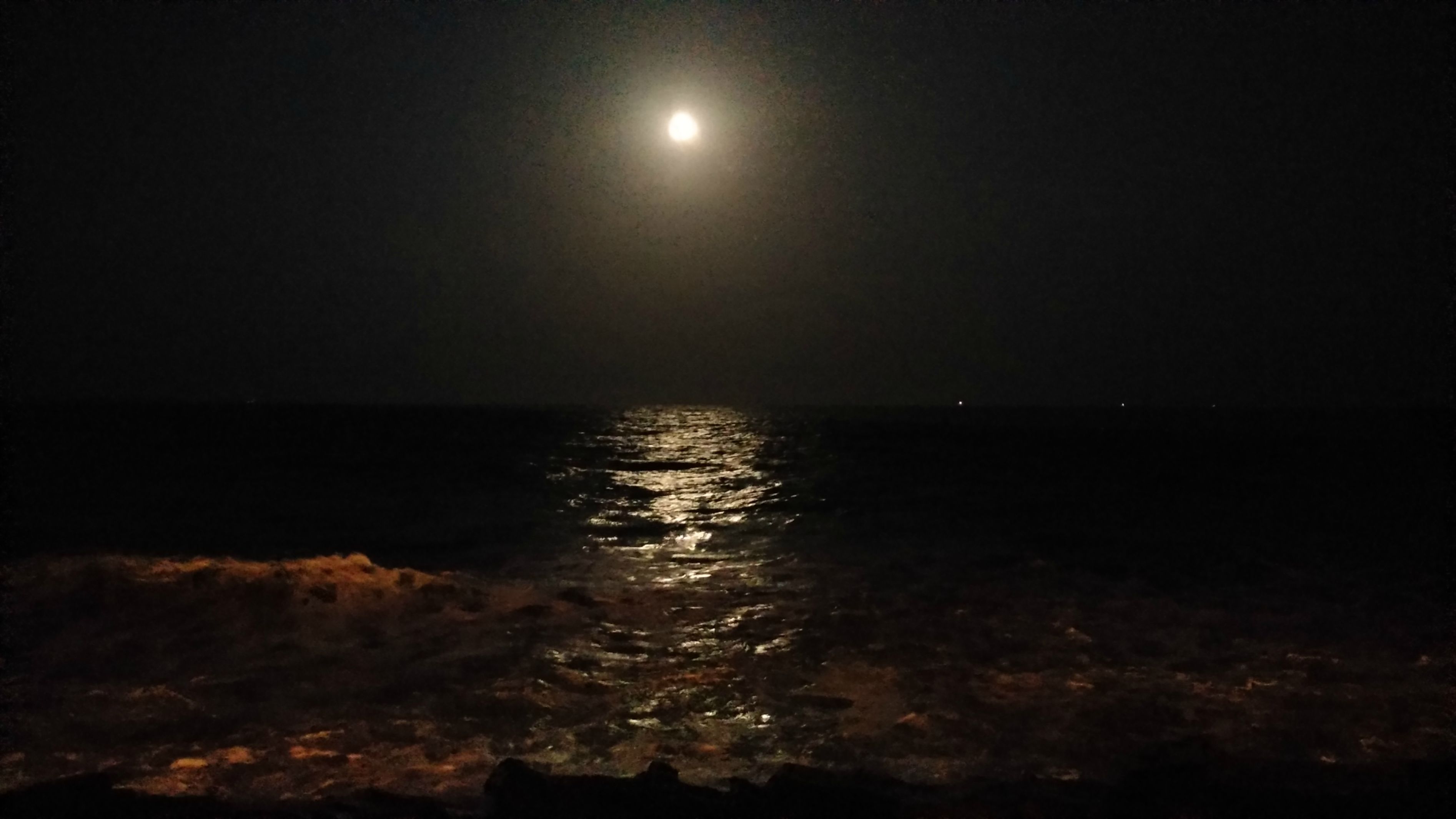 Later we went to the french establishments and had dinner in a famous home restaurant. Food was authentic and rich in taste and the owners were very welcoming. Roamed chatted and had fun till 12 am in the streets and went back to the hotel. 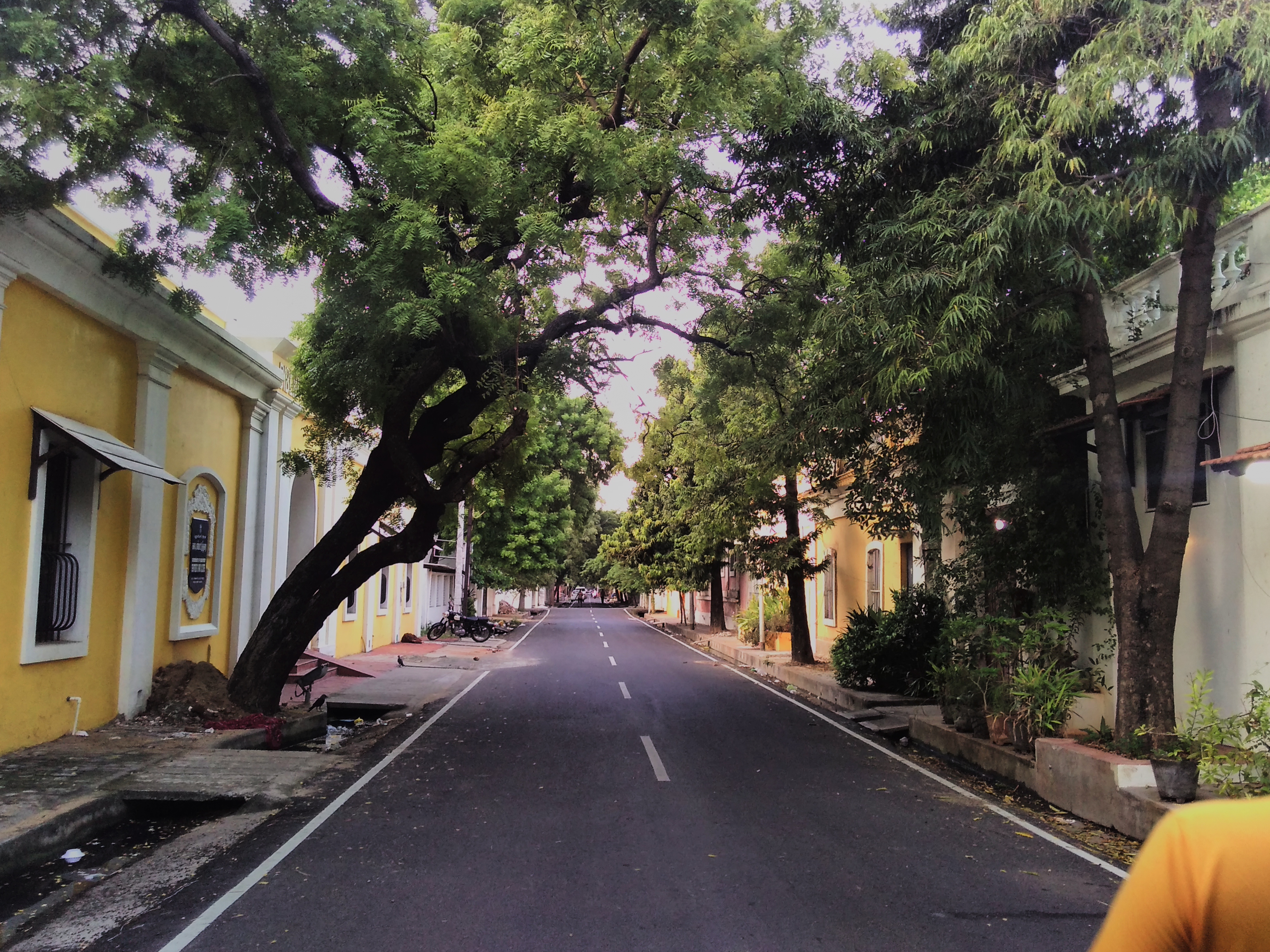 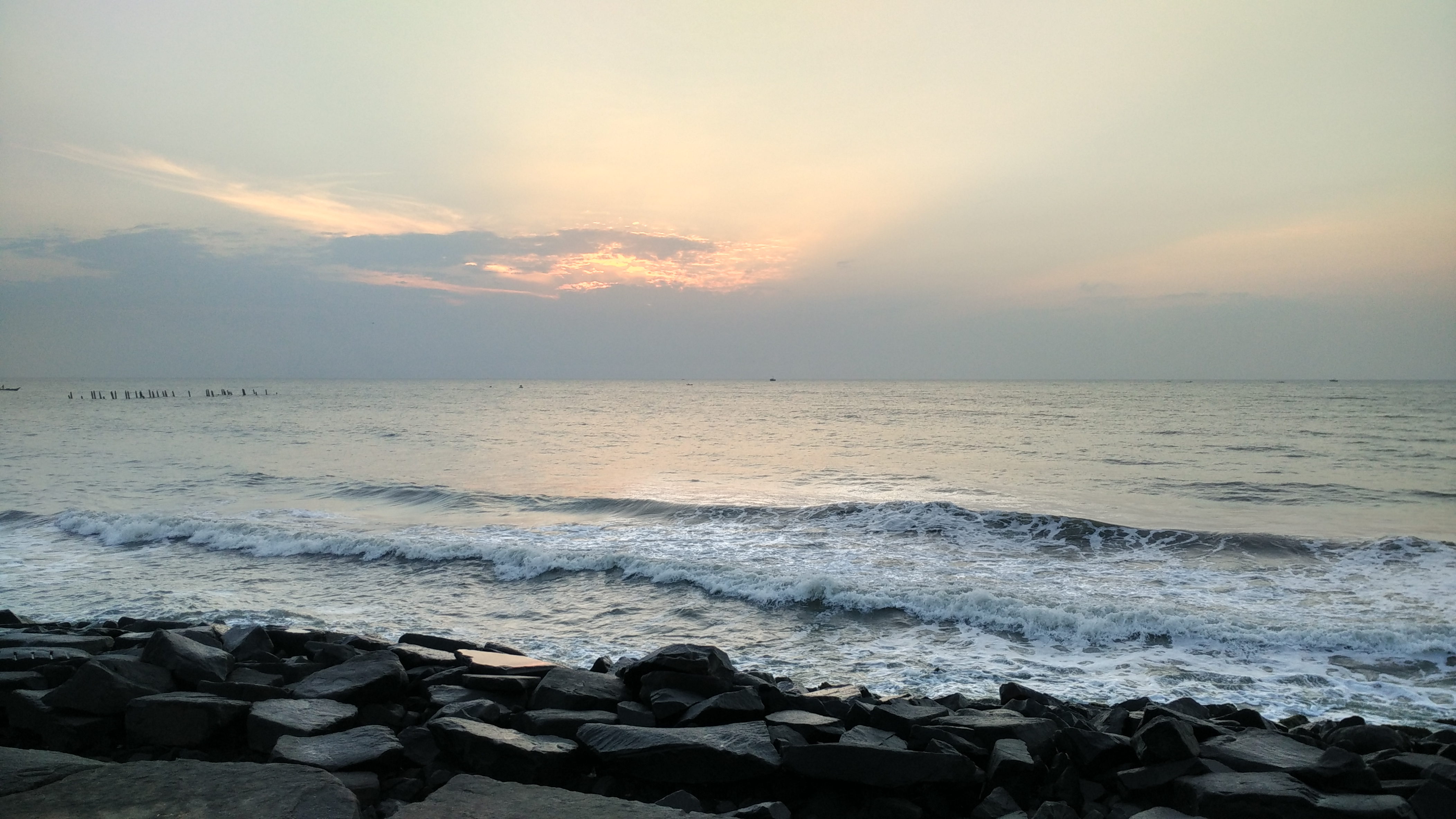 Next morning woke up early to view the sunrise.From there went to paradise beach but boating was closed so we headed to Auroville. Firstly Auroville is way too awesome, Prettly laid back lifestyle and superb idea of the establishment.

According to Wikipedia Auroville is meant to be a universal town where men and women of all countries are able to live in peace and progressive harmony, above all creeds, all politics and all nationalities. The purpose of Auroville is to realize human unity.

How Awesome is that (on first thoughts) then we thought about its economy and how it would run but nevertheless enjoyed here too. Later in evening we packed our stuff and came back to chennai. And bid goodbyes to old friends. 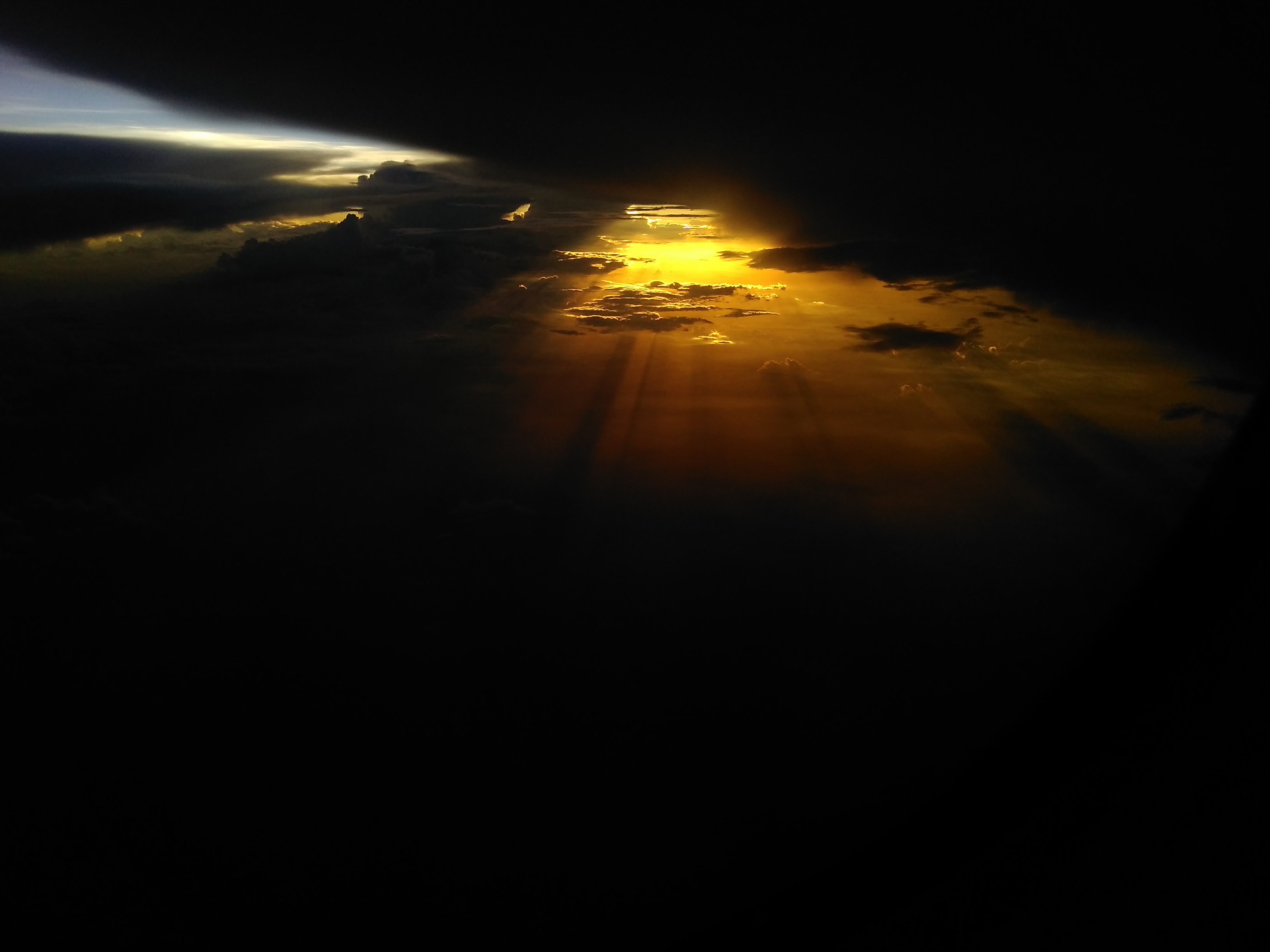 After 22 days left this awesome place with this final touch.